For a long time our favorite pizza has been deep dish pizza cooked in a cast iron skillet, but that may have all changed overnight. Yesterday, I made Neapolitan-style pizza. I cooked it in about 3 minutes by heating my oven to the highest temperature and using the backside of my cast iron pan like a pizza stone. The process was nowhere near as graceful as watching pizzaiolo work a wood-fired oven – it was actually quite clumsy – but the results I got were fantastic. In fact, the pies kept getting better and better as I started to get the hang of it.

After Taryn took her first few bites, she paused for a moment and then said, “I’m not sure if I’ve ever had a better slice of pizza.” By the time she finished, she was certain it was indeed the best, and I’m inclined to agree with her. 24 hours later, I can still recall my first bite… even though my first pie was pretty ugly because I sort of goofed it up, when I bit into it, I was blown away. The flavor was so intense and ambrosial. Every ingredient was perfectly cooked and it all melded together so well. I was nervous the dough would be bland because it’s such a simple recipe with no seasonings other than a pinch of salt, but it ended up being the perfect canvas for the bolder flavors of the tomato sauce, basil, and olive oil.

So, what is it exactly that’s so special about cooking a pizza this way? The blazing fast speed at which it cooks ensures that every ingredient is cooked evenly and perfectly. As long as you take the pie out at just the right time, nothing will be over or underdone. For example, I put basil, shallots, and mushrooms on mine, and when I pulled the pizza out of the oven and bit into it, I realized all of those toppings had been cooked just to the point that their flavors came out and not a second longer. The basil was only slightly wilted, the mushrooms were tender and juicy, and the shallots still had a nice crunch to them. 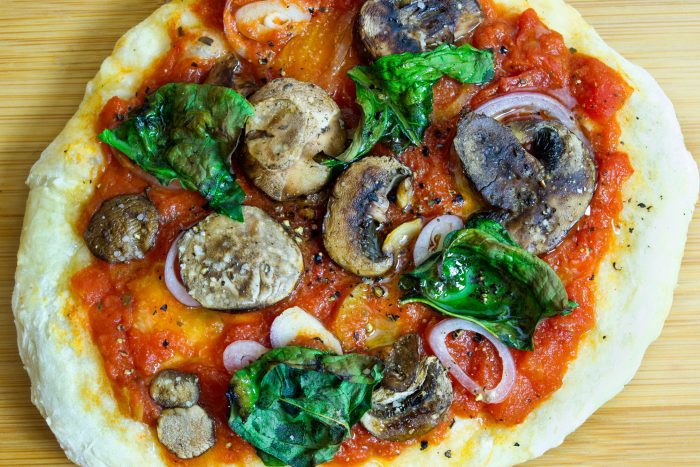 This is basically the way they have been making pizza in Naples, Italy for centuries – the place where pizza was invented. Except in a proper Naples pizzeria, they cook the pies in a wood-fired oven that reaches temperatures up to 1,000º F. They also cook their pizzas in about half the time – 90 seconds or less – because their ovens get so much hotter than a conventional stove. The reason I was able to achieve similar results at home is because I let my cast iron get super hot before I put the dough on it, and cast iron can get very, very hot; much hotter than a conventional pizza stone.

That is because cast iron can withstand immensely hot temperatures while also retaining heat better than any other cookware material I can think of. So the whole time it is being heated, it is soaking all that heat up. I reckon by the time the oven has reached 550, the iron is even hotter than that; but I’ll have to test that with a light thermometer to be certain. That is the big secret to making this work. If I simply put my dough in the pan and popped it in a 550 degree oven, it would not cook in such a short time because it would take several minutes for the pan to reach the same temperature as the oven, which means the hot air is cooking your toppings and outer crust while the bottom is still warming up. That’s why it’s so common for the center of a pizza to be underdone even though the toppings and edges are brown.

Now that I know this method works so well, I’m going to buy a cast iron pizza pan and a pizza peeler to simplify the whole process. Using the pizza peeler to slide the dough onto a large round surface will be much easier than my makeshift method of using a spatula and a pie tin to flop it onto the small base of the skillet. Please let us know what you think in the comments below, and as always, we hope you enjoy this recipe! 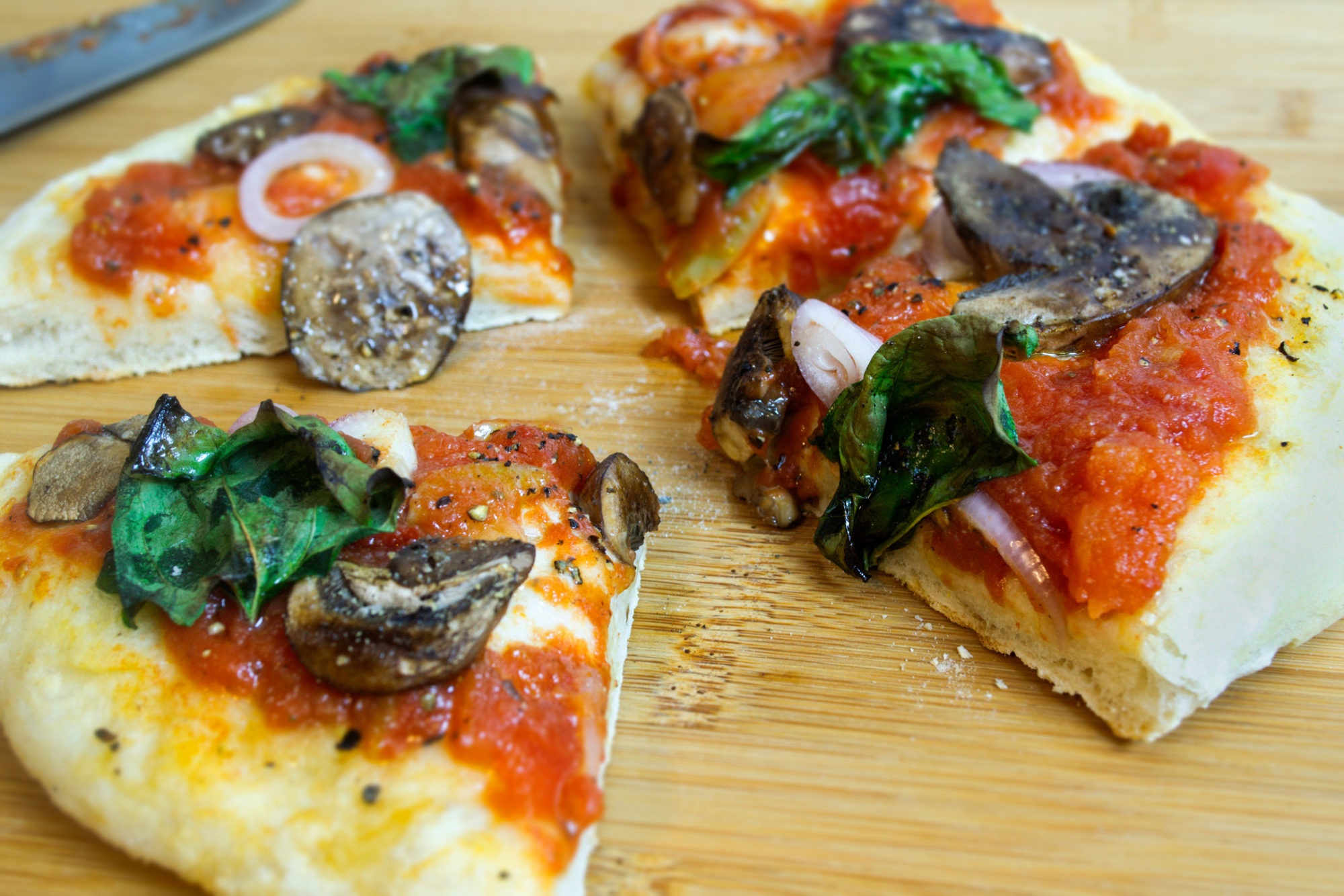 Fresh baked Neapolitan-style pizza with marinara, mushrooms, shallots, and fresh basil. Cooked in minutes just like they do in Italy.

For the Dough
Toppings (optional)

Your pan/skillet must be very clean before you do this. If it has any residue on it from the last time you used it, it will burn and create lots of smoke. Along those same lines, some of your seasoning (oil) may burn off and smoke a little, but it's no big deal if this happens. The next time you add oil to it and cook as you normally would, it will get replenished. If for some reason doing this does remove the seasoning from your pan, then it probably wasn't seasoned very well to begin with and you should re-season it.

The whole cooking process from start to finish should be fast and take no more than about 30 min. Preheating the oven takes about 15 min – yours might be a little faster or slower. Since the pies cook in under 5 min, you should be able to do 3 to 5 in about 15 minutes. I would not recommend keeping this process up for any longer than that, because then you might actually start burning the seasoning off the iron.

I did not include the dough rising time in the prep time for this recipe because you can make the dough any time in advance, and you can let it rise as long as you like or not at all; however, I recommend letting it rise. In fact, making it the night before and letting it sit in the fridge covered in cling wrap for 12 to 24 hours isn't a bad idea. That gives the dough some time to ferment and it's quite yummy that way.

The pizzas I made were about 6 inches in diameter. The larger you make your pie, the longer it will take to cook. Similarly, the more toppings you add to it, the longer you may need to cook it.

Be very careful while doing this. The cast iron gets so hot, it can even burn you through oven mitts. Trust me, I unfortunately know this from experience. Before you attempt removing the skillet from the oven, I would suggest either wearing two pairs of oven mitts or waiting for it to cool down, which takes a good amount of time.