I was staring in my fridge the other day, thinking, “Oh boy, what am I to do with all these potatoes and tortillas?” Then it hit me, chili cheese fries burritos, you dummy! Chili, cheese sauce, fries, burritos… there’s no way you can lose. I’ve been trying to cook healthier stuff lately, so I wanted to make these as healthy as I could while still staying true to the concept – i.e., I didn’t want to swap the tortillas for lettuce and the french fries for strips of zucchini. 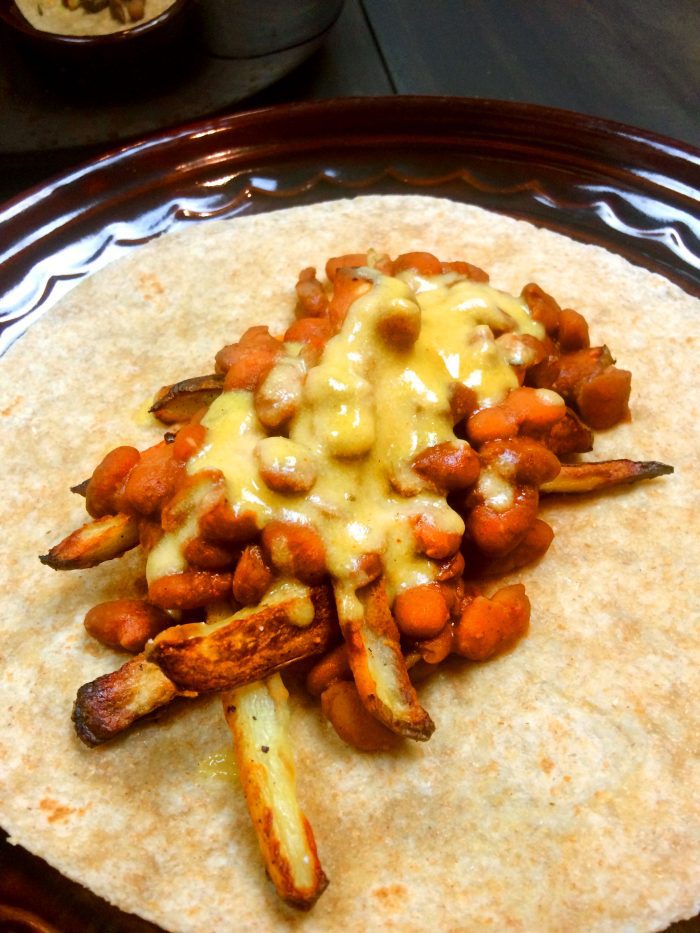 For the cheese sauce, I used the same cheese we used for our Philly cheesesteak quesadillas. It has a nacho flavor, so I thought it would be appropriate for the theme of these burritos. It’s an oil-free recipe made from nutritional yeast, tahini, and corn flour. I assume it’s much better for you than processed imitation cheeses that are mainly vegetable oils. 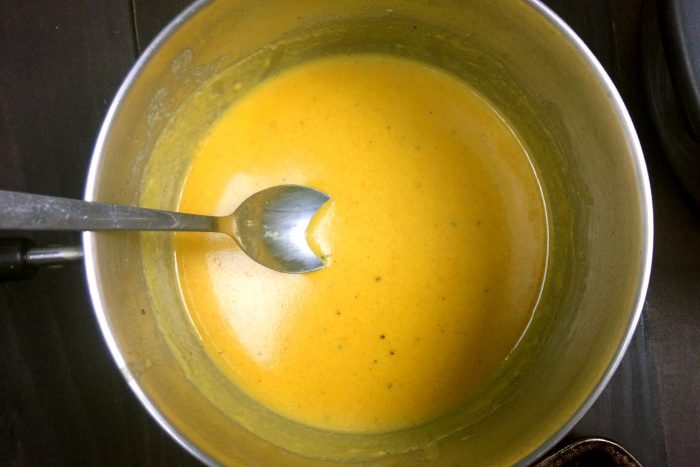 For the fries, I used the same oven-baked recipe we’ve been using for years. It’s a simple and reliable french fry recipe that you can set on a timer while you do other stuff. The chili beans are just pinto beans, veggies, and spices. I added a little vegan margarine to add some extra flavor, but that’s optional. Lastly, for the burrito shells, I used whole grain tortillas. 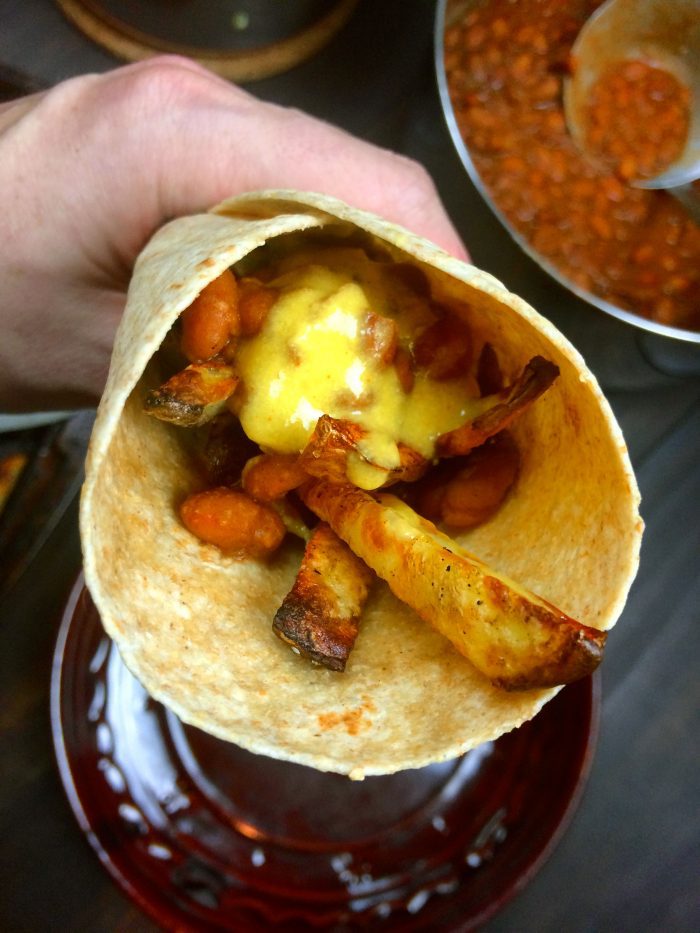 Obviously, if you don’t want to go through the hassle of making all the fillings from scratch, you could easily make the same thing with canned beans, frozen fries, and any kind of vegan cheese you like. Enjoy! 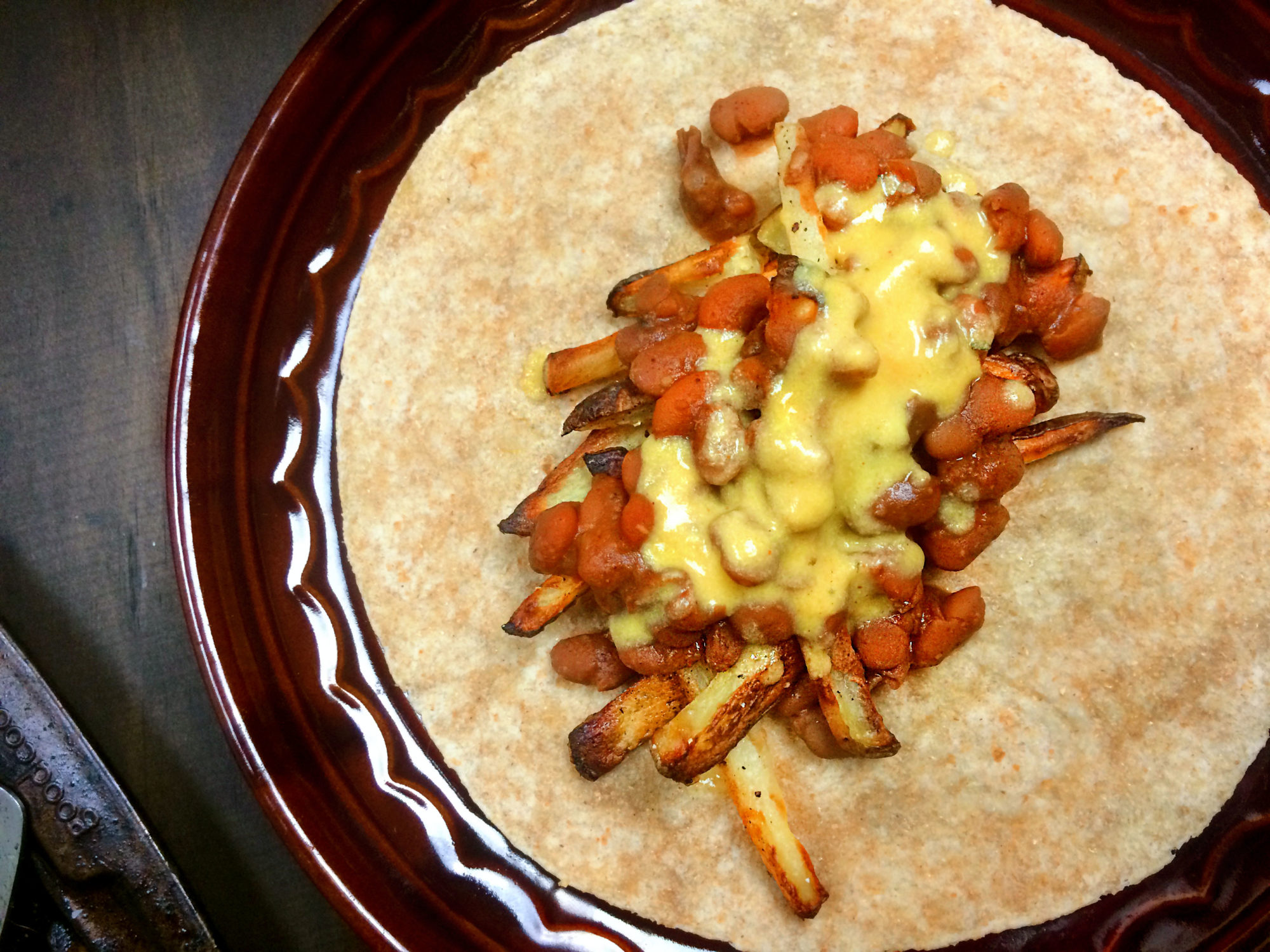 It's important that the potatoes are spaced out in a single layer with some space between them, or else they won't get crispy. Mine were a little too crowded, so I ended up having to cook them an extra 10 minutes to get them as crispy as I wanted them to be.

The longer you cook the cheese sauce, the thicker it will get. If it's too watery for your liking, just let it simmer longer. However, it will not achieve its full thickness until it has cooled. The sauce was still very hot when I took these photos, so it looks a bit thinner than it really is after it's had ample time to cool and gel. I kind of regret not waiting a few more minutes before I took my pics.

I started my chili early in the day and prepped and cooked everything else during the last 90 minutes to cut down the total time. Since I knew this chili was going in a burrito, I wanted it to be thick, so I cooked for an extra 30 to 45 minutes or so on low heat with the lid off.