We decided to buy some Chao Slices when we were at the grocery store today. I’ve had Chao cheese plenty of times before on sandwiches from vegan restaurants, like Homegrown Smoker and Next Level Burger, but this was the first time I ever brought any home to our kitchen to experiment with for myself. There were three flavors of Chao Slices to choose from: Creamy Original, Coconut Herb, and Tomato Cayenne. The third one sounded the most appealing to us, so that’s what we went with. I kind of regret not buying all three flavors for a compare and contrast, but then again, this stuff’s not cheap. Maybe I’ll just do a follow-up review whenever we get around to trying the others. 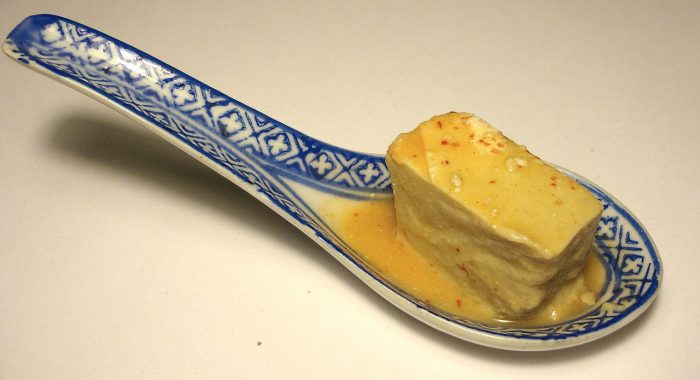 Before I dive into the review, I thought it might be a good idea to talk about what Chao is, for those of you that don’t know. The word chao is a Vietnamese word for fermented bean curd, which is essentially the equivalent of cheese in their culture. Chao Slices, however, are not chao, but they do contain it. Chao Slices – aka “chao cheese” – are an imitation cheese product produced by Field Roast, made from coconut oil, starches, chao, and spices. 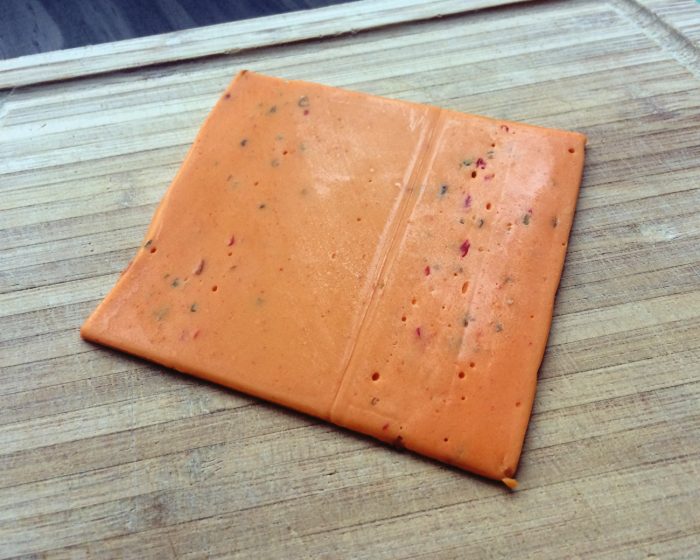 ​I decided to eat a slice of the Chao cheese plain before I made anything with it because that seemed like the best way to get a sense of the cheese’s true flavor, texture, and aroma. I knew from past experiences that it’s hard to single out the flavor of Chao when it’s on a sandwich with a bunch of other toppings and condiments.

As soon as I brought the cheese up to my lips it reminded me of Pepper Jack. It’s been many, many years since the last time I ate real Pepper Jack cheese, but the Tomato Cayenne Chao Slices immediately started to bring back memories of its distinct flavor and aroma. I wouldn’t say it tastes just like Pepper Jack, but that’s certainly the first comparison that came to mind.

Even though the taste and smell were Pepper-Jack-y, the look and the texture reminded me of deli sliced cheddar. In fact, if the slices had little pieces of wax paper between them, they would have been nearly identical – minus the little flecks of pepper, of course. The slices were fairly thick; they were firm but malleable; and they stuck to themselves a little bit, like real cheese but without being impossible to separate – hence no paper dividers. They were definitely nothing like flimsy American singles.

After slowly eating a whole slice by itself, I was ready to make something with the Chao. Quesadillas were already on the menu for dinner, so I figured why not make one for lunch as a trial run. 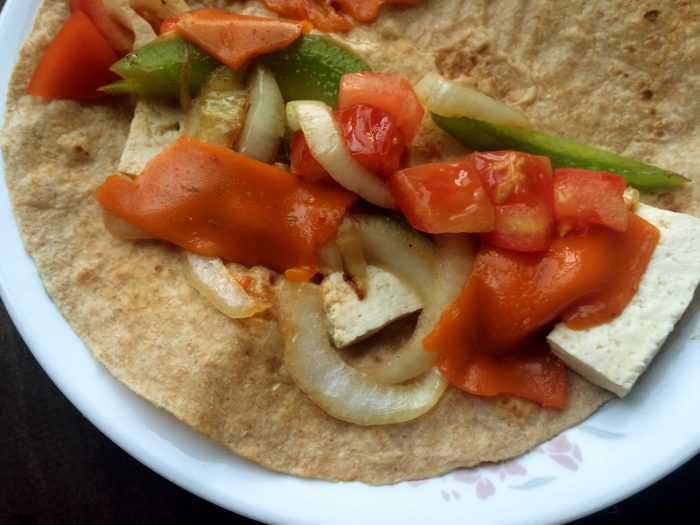 ​It’s hard to describe how Chao melts but I’m going to give it my best shot. Overall, I’d say the way it melts leaves something be desired. It’s not that the meltability isn’t there, it just didn’t melt in the sort of way I was anticipating. I was hoping for a stretchy melt but that’s not what I got. It was more of a soft and gooey kind of melt.

I tore one slice into pieces and put it in a tortilla with tofu, tomatoes, onions, and peppers. The cheese seemed to take a bit longer to melt than I was expecting it to, but it was also difficult to tell when the cheese was fully melted. The problem is, the cheese looks pretty much the same whether it’s solid or melted. As you can see in the photo below, the cheese looks softened but it doesn’t look melted. It is melted, though. This becomes apparent as soon as you touch it or bite into it.

All that said, I’m not saying the Chao Slices were bad melted. It still tasted good, and the texture was pretty decent, too. Even though it wasn’t very stretch, it did have a nice stickiness to it. 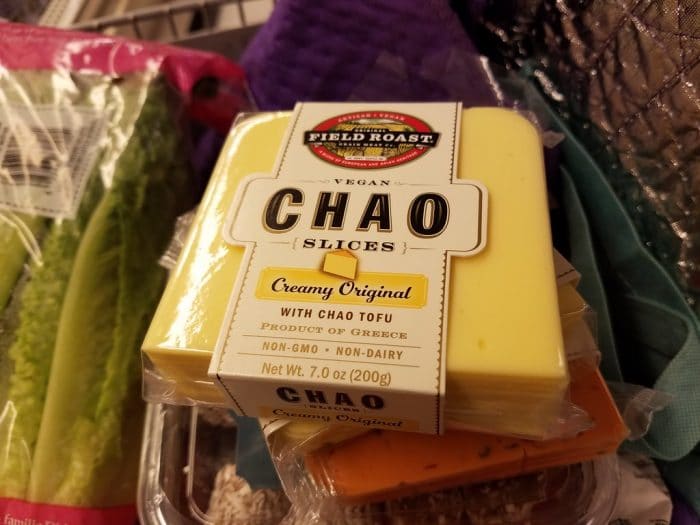 ​As I mentioned before, the Tomato Cayenne Chao Slices had a flavor reminiscent of Pepper Jack when I ate them plain, but after cooking them in the quesadillas, the flavor tasted like a basic cheddar cheese. In fact, the flavor could almost be described simply as “cheese.” I was a bit let down because I was expecting more of a robust flavor with some bite to it; however, the mild cheese flavor was still good, even if it wasn’t exactly what I was hoping for.

Probably Not So Good For…

​I think how much you like or dislike Chao Slices will depend largely on how you use them. They are ostensibly designed to be a deli-style cheese and work best as just that.

​I’m not saying you can’t make the dishes above with Chao Slices, I just think there are better alternatives. If a recipe would normally call for shredded cheese or a cheese sauce, you’d probably be better off using Daiya shreds or a homemade vegan cheese recipe. Chao cheese is a bit pricey – about $5 to $6 for a pack of 10 slices – so any recipe that would use up your whole pack in one fell swoop, like mac ‘n’ cheese, probably isn’t worth it.

I noticed Field Roast actually has a mac ‘n’ cheese recipe on their website, and sure enough it called for 1 whole package of Chao Slices in addition to another cheese sauce you have to make from scratch. While I’m sure it’s probably a very tasty vegan mac ‘n’ cheese, I think I’d just prefer to save my Chao for sandwiches, and use something more practical for big dishes that wouldn’t normally call for sliced cheese for.

​COULD CHAO SLICES FOOL AN  OMNIVORE? 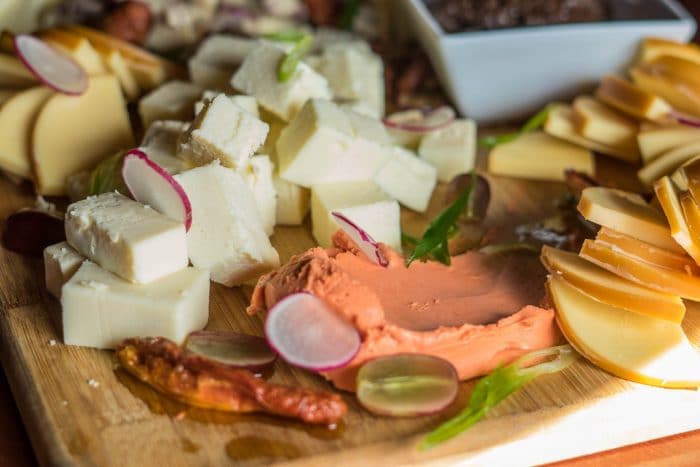 ​I think most omnivores would be easily fooled by Chao cheese. I’m not saying they would be blown away by it, but I imagine most people would probably assume it’s some kind of real cheese. The look alone is convincing enough. In fact, the first time we went to Next Level Burger, we ordered a couple basic cheeseburgers, and even though I knew everything on the menu was vegan, when my burger came out, for a split second I was concerned it had real cheese on it. I think it was just a knee jerk reaction to sight of it because it looked so real.

​I think Chao Slices are a good product and live up to their expectations. If you are someone who can’t live without cheese, Chao Slices are probably one of your best alternatives, if not the best. After many quesadillas, and talking it over with Taryn, we both agreed we like Chao cheese but it’s not something we would use frequently. When I was first transitioning from vegetarianism to veganism, I would have probably gone nuts for a product like this – where were you 5 years ago?!! – but over the years I have grown to love nut cheeses and I would have to say I prefer them to Chao. That being said, I will probably still buy it occasionally when I want to use it for a specific recipe.