If you pay any attention to internet memes, then you may have noticed virtually every quote ever published on social media has been attributed to Albert Einstein. Of course, many of these so called quotes did not actually come from the genius himself, which makes it difficult to suss out the facts from the fiction. One such meme you may have seen floating around, is Einstein’s thoughts on vegetarianism. Vegans love to tout that Einstein was a vegetarian, whereas naysayers are quick to gleefully dismiss it as total rubbish; so who is actually correct? 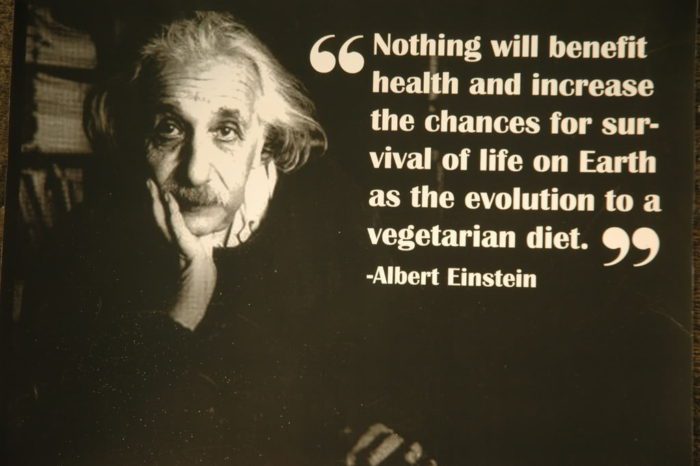 It turns out neither camp is fully correct. For most of Einstein’s life he was a meat-eater, though he didn’t seem to care for it very much. Near the very end of his life, he basically adopted a vegetarian diet for about one year, but he cited health concerns and digestive problems as the main reasons, not ethics – Einstein was chronically ill for most of his life. However, that’s not to say he didn’t support the ethics of vegetarianism; he did. He also expressed some guilt for eating animals in a lettered he penned to Max Kariel in 1953.

Below, are four times Einstein spoke on the matter.

Although I have been prevented by outward circumstances from observing a strictly vegetarian diet, I have long been an adherent to the cause in principle. Besides agreeing with the aims of vegetarianism for aesthetic and moral reasons, it is my view that a vegetarian manner of living by its purely physical effect on the human temperament would most beneficially influence a lot of mankind.

I have always eaten animal flesh with a somewhat guilty conscience.

So I am living without fats, without meat, without fish, but am feeling quite well this way. It always seems to me that man was not born to be a carnivore.

I like neither new clothes nor new kinds of food. I very rarely eat animal flesh, and when I do it is always with a dose of guilt. This is not, however, because of some moral guilt but because I simply believe that meat doesn’t do good to your body, mind especially. I like life in modesty. You see on that table that there is milk, bread, cheese, cakes, and fruits. What other food can a man want? In addition, to this fundamental food.