The “Blooming Onion” is arguably the best appetizer at Outback Steakhouse, but as you could probably guess, it’s far from vegan-friendly – both the batter and the dipping sauce contain dairy and eggs – so we decided to veganize it! Therefore if you and your friends plan a chill evening gathering and lack vegan snacks ideas, don’t worry! We got you!

First of all, I want to share an incredible experience caused by this blooming onion recipe. I know for a fact that you’ll be as surprised as we were when you’ll find out about it! Therefore, while doing research for it, we found a lot of conflicting information. There seemed to be some confusion over the exact method of preparation and the ingredients of the sauce. So, we started to look for some exact answers.

Jokingly, we called up Outback Steakhouse and asked them how they make it. As you may also think, we figured they would probably tell us to get lost. However, much to our surprise, they actually told us exactly how they prepare it, including how they make the sauce! How amazing is that! 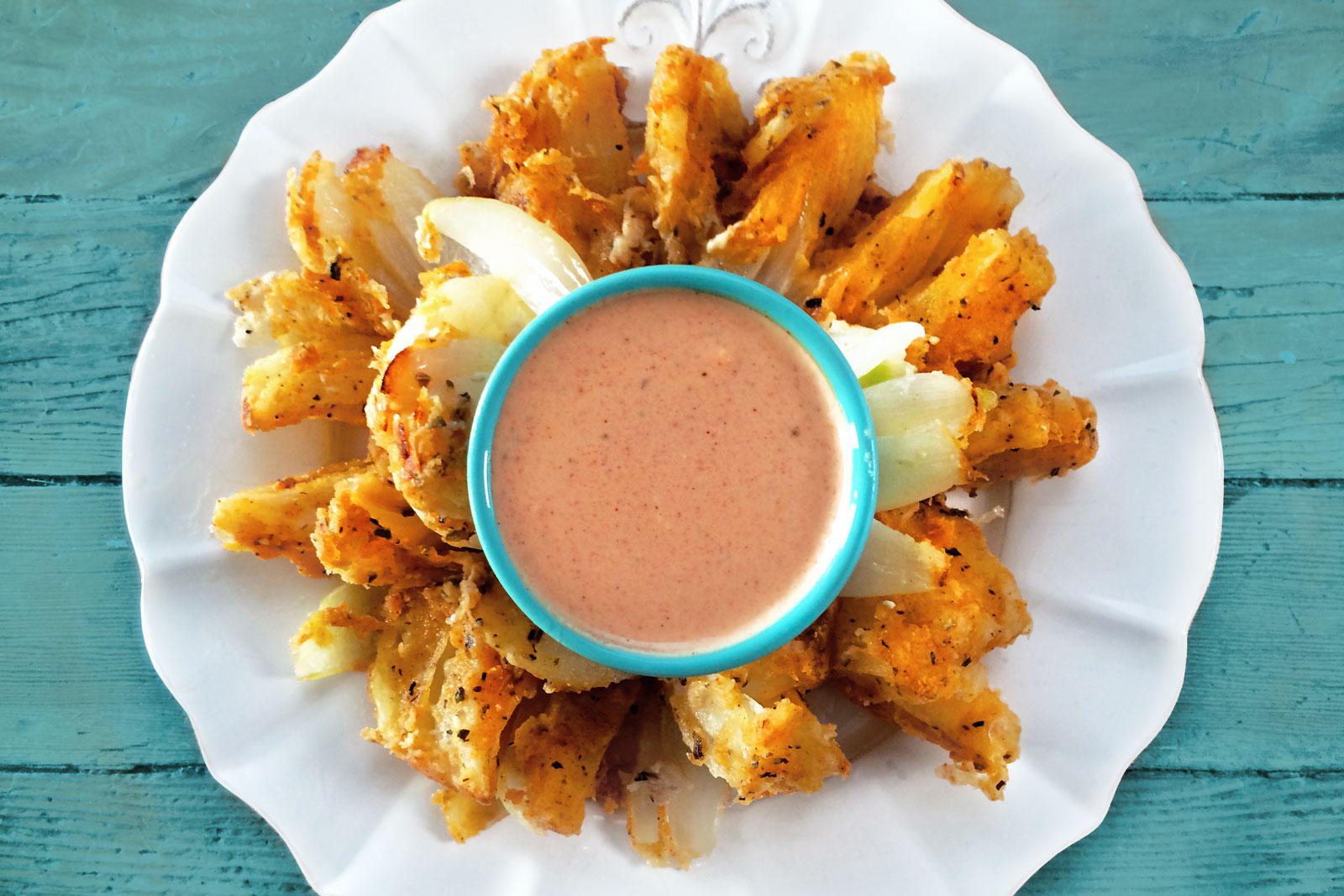 For the dipping sauce
For the batter

After making this recipe, I learned a few things that I'd like to share that would make the whole experience easier and turn out better. First, I learned that the bigger the onion, the harder it is to work with. I went with a very large 2 lb. onion, but if I were to do this recipe again, I would definitely choose a smaller onion. It was way too hard to work with such a large onion, and it didn't cook all the way through in the middle.

Second, I should have been more thorough and coated the onion twice with both the flour mixture and the soy milk mixture. I did not repeat the batter steps twice, but next time I will because I did not anticipate how much batter would come off during the frying.

Another thing I learned was that different brands of horseradish are spicier than others. I started with 2 tbsp of horseradish in the dipping sauce, but ended up adding 3 more tbsp to get the level of heat I wanted. I would recommend starting with 2 tbsp and tasting it to get to the level you like.

All in all, this vegan blooming onion is a handful of ingredients, baked, crispy, and the sauce is like pure happiness. Also, it is a much healthier version than the original, great for entertaining, no greasy mess, and perfect for any occasion! So, why any vegan won’t give it a try?

Finally, please keep us posted in the comment section below with all your results with the vegan Blooming Onion recipe. You know how excited we get when we hear from you! Also, do not hesitate to ask any further questions on this topic and to share it with all your loved ones. I bet they won’t even tell that it’s a vegan snack considering its incredible taste!

If you find this article helpful, please let us know in the comments below. And if you have any more questions about what other foods are vegan or not, leave a message in the comments section and we’ll be very happy to address it for you.

Learn more vegan-related topics like cooking vegan dishes tutorials, vegan options on restaurant menus, and information about a certain food if it’s vegan or not, all of them on our website.