Whether you're vegetarian or a hardcore meat-lover, you'll be hard-pressed to decline a delicious, mouth-watering plant-based burger. Our beyond burger review compares several other competitor brands so you can make an educated decision before you bite into this tasty handheld meal.

But why is a protein burger it so different than the typical veggie burger we find in the frozen food aisles in grocery stores? Most importantly, what exactly makes it so tender, juicy, and so darned meat-like? The secret, believe it or not, is something you can typically find in your average farmer's market.

But first, let's delve a little bit into this delicious burger's background and its health benefits.

Quick Navigation
What Is a Beyond Meat Burger and How Is It Different than a Veggie Burger?
Who Eats It and Why?
Not Just a Burger: Different Ways to Use Beyond Meat Protein
How We Reviewed
Beyond Burger Review
Comparable Burgers
The Impossible Burger
Hungry Planet burger
Moving Mountains burger
Next Level burger
How Does the Beyond Meat Burger Stack Up?

What Is a Beyond Meat Burger and How Is It Different than a Veggie Burger?

I've had some great veggie burgers in the past --.and some not so great ones too. They were either too dry, too moist, or I could taste every single piece of vegetable used to make the burger. While it is a good option, it did not replace the look, texture, and taste of a hamburger.

Biting into my first Beyond Meat burger was a mixture of surprise and awe. I have had my fair share of veggie burgers, but this was a burger deserving of its very own category. My brain knew it wasn't meat, but my tastebuds cheered in meaty delight. Behold: The burger that has the same taste and texture as a hamburger, but isn't.

A beyond meat burger is something that looks, feels, and tastes like a hamburger without using a single morsel of actual animal. Beyond meat is made of 100 percent plant-based protein: peas, specifically. This means it's vegetarian and vegan as well as soy-, gluten-, and GMO-free.

But while it consists mostly of peas and other protein, it does not taste anything like a veggie burger. That's why it deserves its own category: a protein-based burger.

Who Eats It and Why? 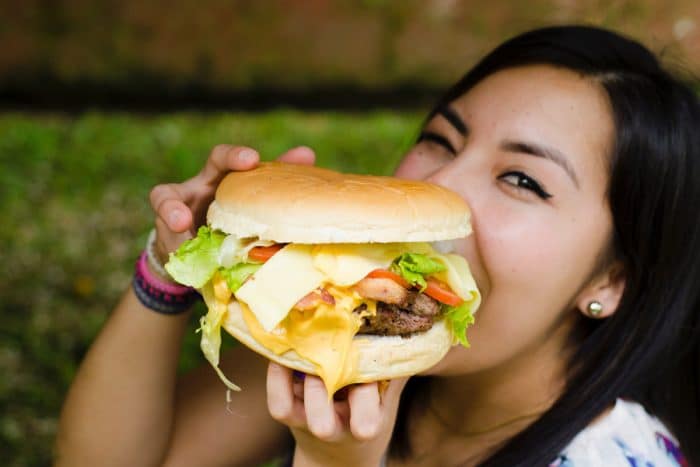 Beyond Meat has gone above and beyond to give their customers the best plant-based protein they could design. The burger "meat" is so well designed that the burger looks like its "bleeding" when it's cooking. It also changes color from its raw red state to its dark brown, cooked state: just like animal protein.

The secret to its bleeding is quite simple: beets. Beyond Meat uses peas as their primary source of protein but they also include other ingredients to mimic the texture and look of their burgers. So when the burger is grilling (or when you bite into it if you like it on the bloody side), you'll see beet juice running through the patty.

Their target customers aren't just vegans or vegetarians who no longer eat meat. Mostly, they're targeting those who already eat meat — that's why most of their frozen patties sit side-by-side with animal-based burgers.

Beyond Meat burgers aim to get people to eat less meat by giving them a juicy burger without all the downsides (animal welfare and sustainability issues).

When it comes to nutrition, however, Beyond Meat isn't exactly the healthier option. Both protein-based and animal-based patties have a similar number of calories as well as protein content. Whether it's healthier or not depends on the fixings such as cheese, the bun, and any condiments.

Not Just a Burger: Different Ways to Use Beyond Meat Protein 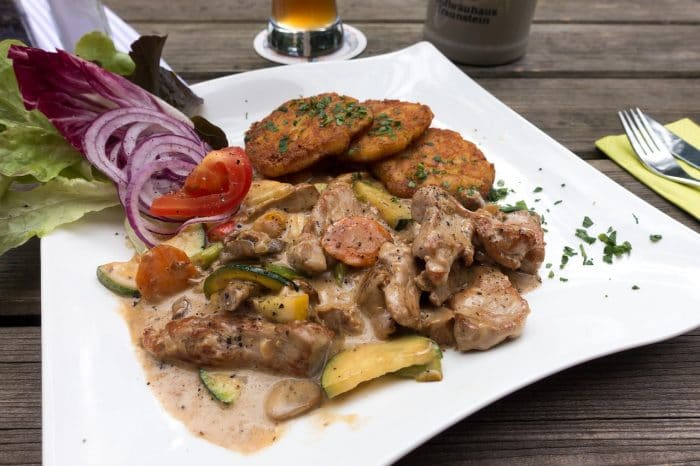 Just because it's shaped like a patty doesn't mean you have to make a burger out of it. Think about it: There are hundreds of recipes that use ground beef as the star of the meal, yet we usually use it for hamburgers.

Beyond Meat has several products that mimic meat such as sausages and "beef" crumbles. If you happen to get your hands on some of their Beyond Meat burgers, your options are virtually endless. You can crumble the protein in a skillet and make some delicious meatless burritos or tacos.

Or mix it with some quinoa, beans, lettuce, and tomatoes for a nutritious power bowl.

Other recipes include sans-meat meatloaf or faux meat balls. If you need some protein in your pasta, crumble it up and toss it with your favorite penne recipe. Alternatively, switch up the beef with Beyond Meat next time you make your grandmother's famous beef empanadas -- all the protein without any of the guilt.

While we would have loved to stuff our bellies to the brim with all of these delicious meatless options, our doctors (and significant others) advised against it. Therefore, we researched the web and used real consumer reviews and testimonials to reach our conclusions.

Once we completed our beyond burger review, we compared it against four other meatless options to see how it stacked up against its competitors.

Our beyond burger review focuses on Beyond Meat's burger (none of their other meatless products). Although currently unavailable on Amazon, customers rated it 4.1 stars out of 5 and Amazon restocks often.

However, you'll also find Beyond Meat burgers (in packs of two) sold at brick-and-mortar stores such as Whole Foods. You'll find them in the frozen food aisle either next to the meat patties or the vegetarian section (or both). Depending on the retailer, it costs $7 to $10.

Customers who wrote a Beyond Burger review raved about their similarities to animal burgers. They look like hamburgers, have a similar smell, and most importantly: taste very similar. Buyers who recently changed to a vegan diet purchased these and are very satisfied with their products.

You can cook them on practically any surface: barbecue, skillet, or an electric griddle. Add some salt, pepper, and your favorite toppings and you'll have a burger even your carnivore friends happily enjoy.

There has been some serious discussion regarding the Beyond Burger's fatty taste. If you're not a hardcore meat lover, the burger's coconut oil (which tastes like meat fat) might turn you off. It also doesn't get super crispy like a traditional hamburger will after you cook it.

But topping it with a crispy bun, lettuce, and your preferred condiments remedies that issue. Its texture is spot on: chunky, chewy, and a little red. Overall, a fantastic option for carnivores looking for a plant alternative to hamburgers. 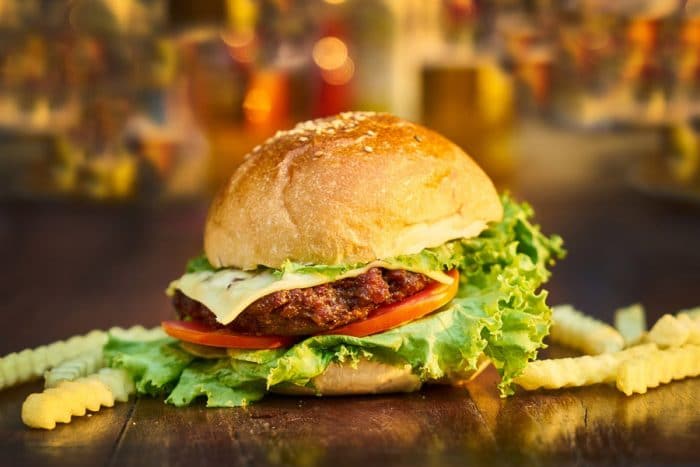 Our beyond burger review wouldn't be complete without some comparisons. Below are some options if Beyond Meat is unavailable or if you want to try something new.

Heme is short for legume hemoglobin — a protein found in soy. This key ingredient is what gives this meatless burger its meaty taste and texture.

But the most significant difference between the two is how its packaged. In our beyond burger review, you'll note the protein is shaped like a patty. However, the Impossible Burger doesn't start as a burger at all — it looks like ground meat.

This enables restaurants to make what they want of this faux meat: use it as a pizza topping or incorporate it into your next bolognese sauce or chilli recipe. This is truly the protein that can do it all and still taste like meat.

According to reviews, the Impossible Burger 2.0 is a vast improvement on the original recipe. Consumers can taste the fat, the salt, and the beef-like taste with every bite of the new and improved version. It truly can fool even the most die-hard meat lovers that what they're eating is genuinely beef. And, ultimately, that's the point.

Chefs looking to expand their menu into protein-based, meatless options should consider Hungry Planet. Although it is unavailable to regular folk, ordering anything from faux chicken to meatless burgers is easy for restaurants and catering companies.

Just last year, for example, Hungry Planet teamed up with the Santa Barbara Unified School District to serve meatless meals to hundreds of school kids. They served up vegan chicken chile verde burritos, double cheeseburgers, and meatball subs — all of which sold out both days.

Considering the typical child's picky food habits, the fact that everything was sold is no small feat!

The 5.3-ounce Hungry Planet Burger consists of soy, sunflower oil, beet powder, spices, and many other vegan ingredients. By itself, the burger contains 200 calories, 29 grams of protein, and 8 grams of fiber. If you're interested in their meatless burgers (or any other of their products), contact them via their website. Prices aren't listed.

This U.K.-based company took scientists two years to develop, and their star ingredients include mushroom, pea protein, potato protein, and coconut oil. It uses the same beet juice trick as Beyond Meat to mimic a hamburger's juicy insides.

Plus, because its 100 percent animal-free and it does not contain any antibiotics or hormones. Pricing varies from restaurant to restaurant and isn't readily apparent on their website.

Our last competitor is a restaurant chain offering 100 percent vegan fare. Everything on their menu from their burgers to their shakes is vegan-friendly without skimping on deliciousness. They offer several locations in several states including California, Oregon, Washington, New York, and Texas. Prices vary depending on location and meal.

Their mission aims to deliver the same juicy, mouth-watering burger experience without further harming the environment. They care about sustainability and eco-friendly practices: from the food on their menu to the furniture in their restaurants.

According to a recent review about their Seattle, Washington location, their burgers have the same taste and texture as a hamburger, and their prices are reasonable too.

How Does the Beyond Meat Burger Stack Up?

Unfortunately, protein-based burgers aren't common enough to make a whole-hearted decision on which one is the best. As it stands, there are only a couple of protein-based burgers available in grocery stores that customers can buy and cook at home. Otherwise, the closest protein burger is a drive away to your nearest restaurant.

We do not doubt that in as little as five years, this market will boom exponentially. The need for sustainable faux meat and more vegan options will see the creation of many more protein-based burger companies. But until then, we'll have a Beyond Meat burger, please!

Have you ever tried any of these burgers? Let us know what you thought of them in the comments!

Samuel Warde
Previous Post: « The Beginner’s Guide on How to Go Vegan Without Losing Your Sanity
Next Post: Is Chocolate Vegan? A Definitive Answer on Everyone’s Favorite Sweet »