You won’t find many vegan options at KFC, but you can still enjoy the taste at home with this copycat recipe!

This is a long post, so click here to jump straight to the recipe if you don’t want to read the whole thing.

When we were kids, we spent plenty of nights eating KFC for dinner. Even though we both came from families that cooked regularly, some nights KFC was simply more convenient – and a guilty pleasure – so that’s what we ate. It’s been ages since we’ve eaten real KFC, but we’re still nostalgic for it every once in awhile. That’s why we thought it would be fun to create a vegan version of a classic KFC meal. We also thought it might be helpful to other vegans out there who are trying to satisfy their fast-food cravings.

For a long time, KFC was offering a special called the “Family Feast.” It now appears to have been replaced by the “$20 Fill-Up™,” which we think is a laughably tacky and shameless name, so we decided to stick with Family Feast for our copycat recipe. The Family Feast is essentially the ultimate KFC family dinner. It basically consists of: 1 large bucket of fried chicken, mashed potatoes, gravy, biscuits, and coleslaw. 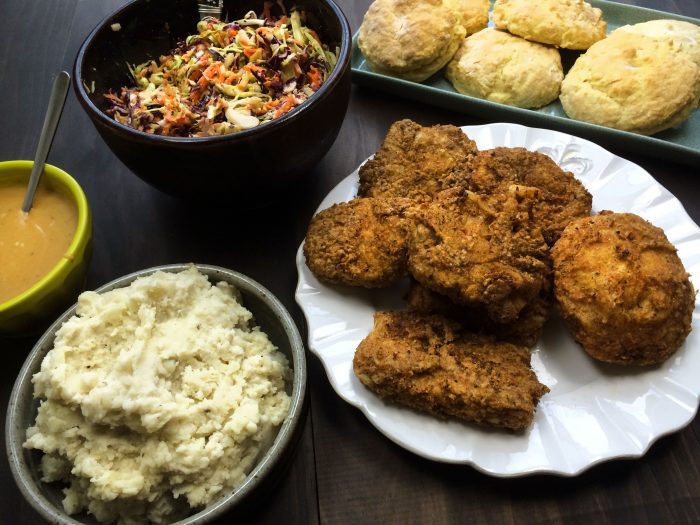 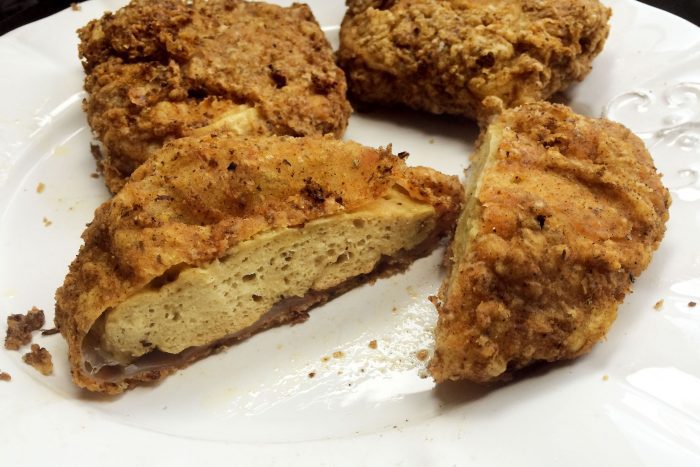 The hardest part of this recipe to veganize was obviously the fried chicken. We could have just bought a bag of Gardein strips and called it a day, but as good as they are, they don’t really look or taste like real KFC. We wanted to make our “chicken” from scratch and get it as close to real KFC as we could.

A piece of fried chicken essentially consists of three parts: the chicken meat, the skin, and the batter. So that’s what we had to recreate. We used our basic chick’n-style seitan recipe for the meat; for the skin, we used spring roll wrappers; and for the batter, we used our veganized version of the colonel’s Original Recipe® seasoned with 11 herbs and spices.

The combination of those three elements worked well to create a very life-like fried “chicken breast.” If you wanted to take things a step further, you could also use thick wooden skewers to create “bones” for drumsticks. Above and beyond anything else, though, it’s the batter that really makes the recipe convincing.

If making your own faux chicken from scratch sounds like more work than you want to do, you could still just opt for buying Gardien, seitan, tofu, or any other chicken substitute you like, and simply batter and fry it the same way we did to get a more authentic fried chicken look and flavor. 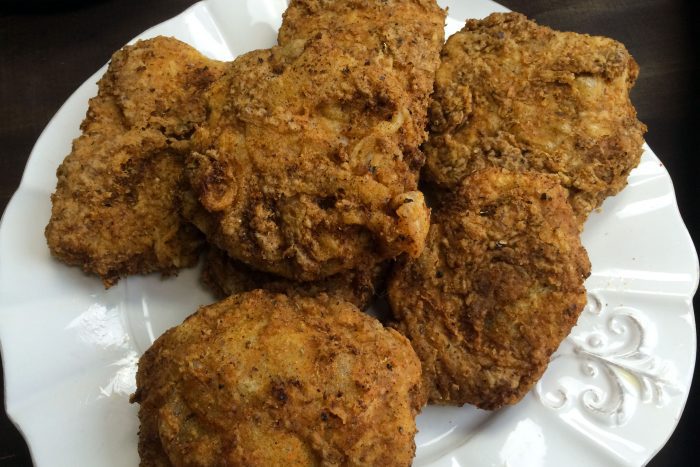 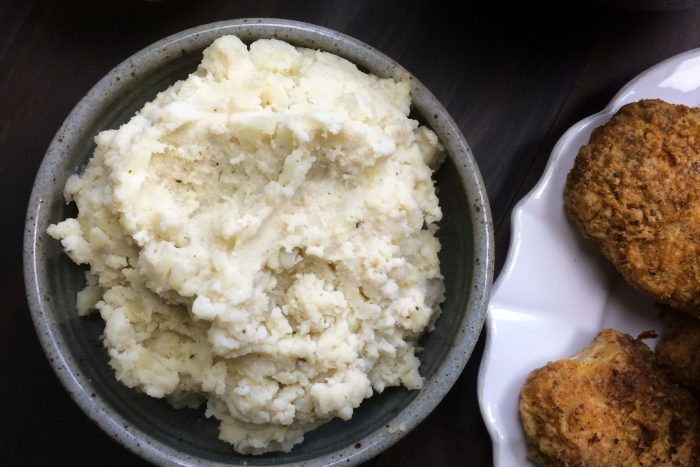 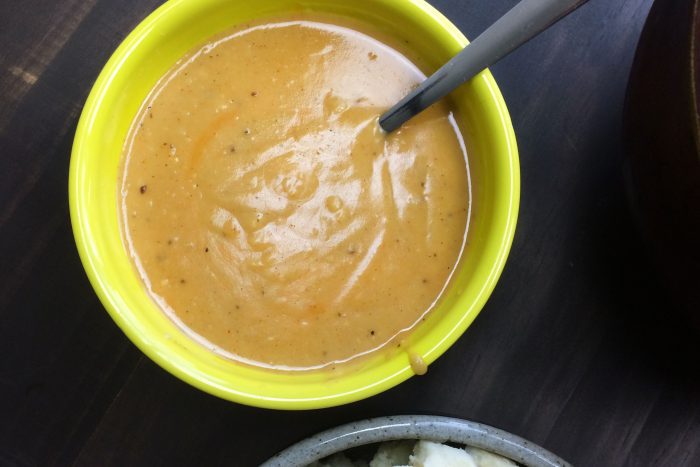 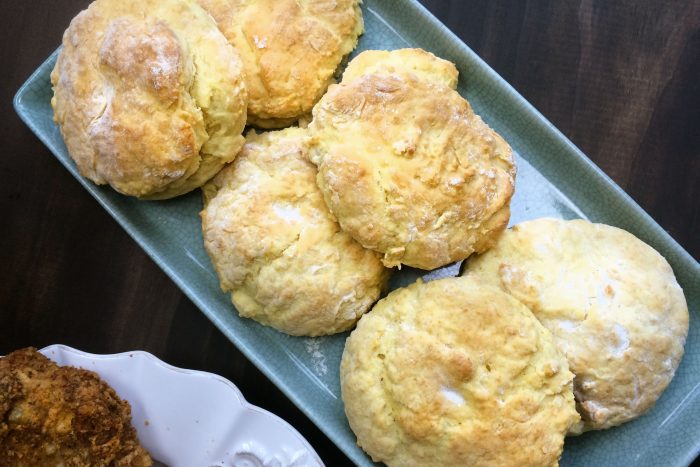 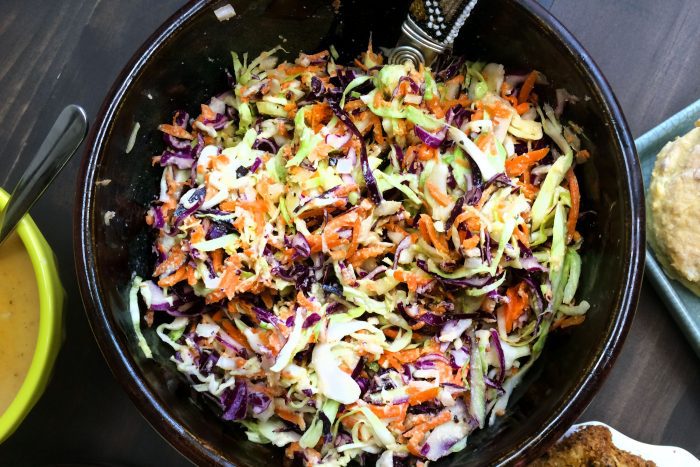 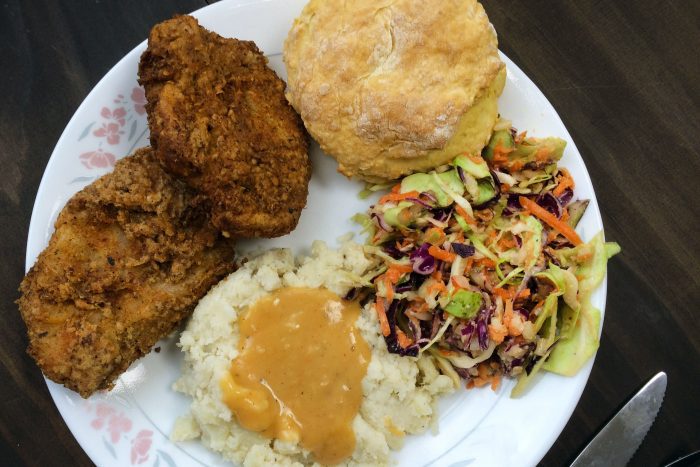 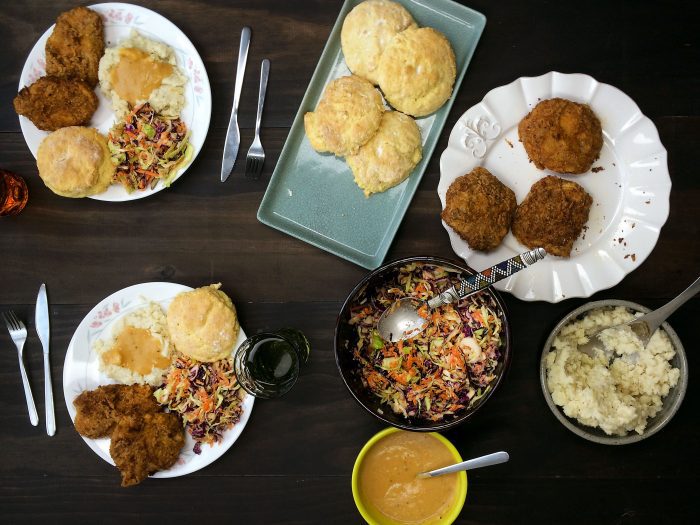 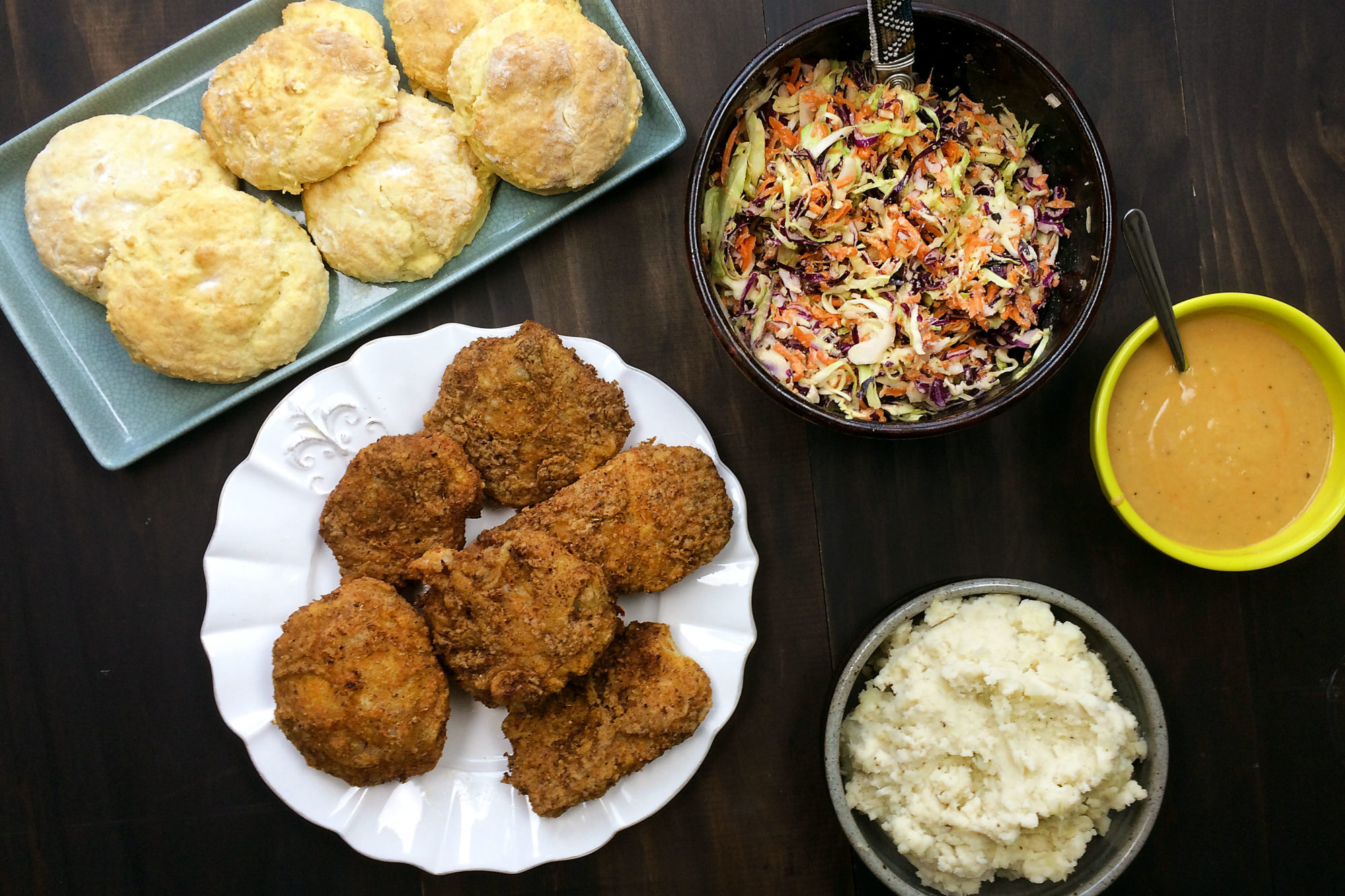 We like making seitan from scratch, but you can save yourself some time by simply purchasing it from the store. You could also use a brand name chicken substitute as your base, like Gardein or Beyond Meat.

We've received a couple of comments from readers saying the baked seitan is too hard and/or dry for their liking. If you like a softer, moister texture, we suggest adding an inch of water or veggie broth to your casserole dish to keep it moist in the oven, or boiling the seitan instead of baking it.

UPDATE 08/25/16: KFC's original secret recipe has been leaked by a man related to the author. We were pretty close, but as you can see, we got a few things wrong. The original 11 herbs and spices (allegedly) are: