You might wonder how you'd ever go vegan because you'd have to give up so many great foods. One example is butter, especially since you love to spread it on everything. In order to consider vegan alternatives to this delicious spread, you'd need someone to answer the question: What is vegan butter?

What Is Vegan Butter?

"Vegan butter" isn't a term that people use very often. It makes sense, then, that you'd ask, so, what is vegan butter?

If you're curious about what exactly vegan butter is, it might help to first have a better understanding of what butter is. 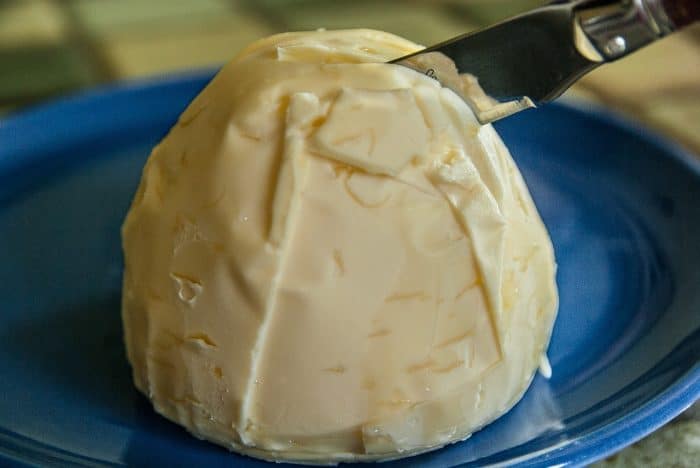 Butter is a condiment and spread that people commonly use. Manufacturers of butter usually make it using cow's milk.

Butter is composed of milk fat that has been isolated from the other components of milk. The production of butter involves separating the cream from the rest of the milk and then churning it to further separate the milk fat from the liquid, usually called buttermilk.

Butter has a very high fat content and is a high-calorie food. In fact, it's about 80 percent fat, with the majority of the rest of the content being water. This makes sense, considering that it's basically the fatty part of milk after machines have separated it from carbohydrates and proteins.

People often use butter for cooking and baking. It's also a very common spread, and people use it on bread and rolls.

DIFFERENCE BETWEEN REGULAR AND VEGAN BUTTERS

"What is vegan butter?" is an interesting question with an answer you might not expect. 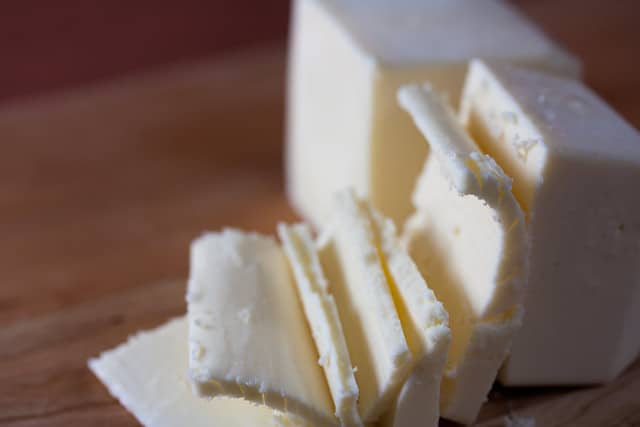 You've probably heard of margarine. If you're looking for vegan substitutes for butter, most of these will fall under the category of margarine. You might find it surprising that vegan butter and margarine are often one and the same; this is because companies haven't generally marketed margarine as vegan butter.

While cow's milk is needed to make regular butter, margarine is made from vegetable oils. Manufacturers can use different types of oils to make margarine, but in general, the ingredients don't come from animals. Olive oil, coconut oil, and canola oil are just a few of the examples of oils that manufacturers can use to make vegan butter.

Margarine is typically composed of 60 to 80 percent vegetable oil. It's actually cheaper than butter in stores. Believe it or not, Americans actually consume more margarine than butter.

What is vegan butter, then? Is it margarine? Actually, although many kinds of margarine are vegan, margarine is not 100 percent synonymous with vegan butter.

Not all kinds of margarine are vegan. Some of them, while still containing far less animal product than butter, still contain trace amounts of animal-derived ingredients, such as whey.

Smart Balance, Country Crock, and I Can't Believe It's Not Butter are some of the brands that can contain whey. However, these brands also give you vegan options if you want them, and there are many kinds of margarine out there that are 100 percent vegan.

It's only in the past decade or two, however, that the manufacturers have marketed margarine as vegan butter. Before that, being vegetarian was the popular way to go, with veganism not being very common at all.

Even the kinds of margarine that were 100 percent plant-based were marketed as margarine rather than vegan butter. This is probably why many people don't know how commonplace and readily available vegan butter is. In fact, this may be why you asked, what is vegan butter?

GREAT VEGAN BUTTERS YOU CAN BUY

You're curious about the answer to the question, what is vegan butter? If you have an interest in actually purchasing vegan butter in the store, there are many great options.

You've likely seen advertisements for I Can't Believe It's Not Butter on TV at some point. Even though this isn't the best example because it isn't entirely vegan, the name says it all. People who have tried it say it's delicious, and it really does taste so much like butter that few can tell the difference.

There are other vegan butters that are great options. Earth Balance, Fora Faba, Flora, Melt, and Miyoko's are all completely vegan. All of the varieties of these brands are vegan.

Earth Balance is extremely popular. You can use it just like you could use butter: as a spread, in baking, or in sauces. You can get it in its original form, which is 70 percent vegetable oils; however, it also comes as baking sticks, with added omega-3, soy-free, and more varieties. 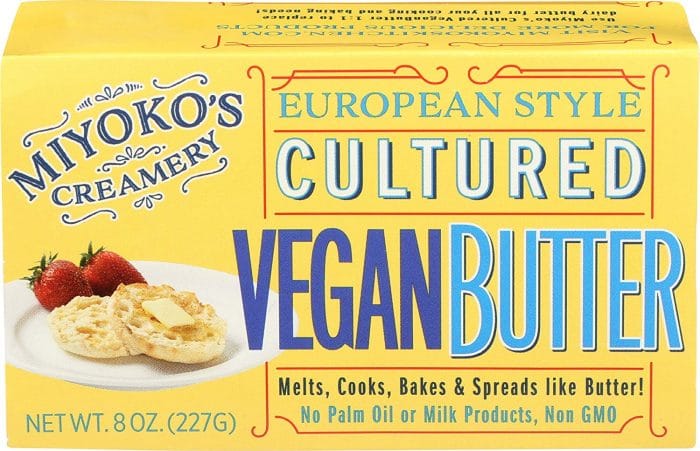 Miyoko's Creamery European Style Cultured Vegan Butter is another wonderful choice. Most vegan butters actually contain palm oil, the harvesting of which is responsible for a lot of the destruction of the rainforest and the killing of many animals. However, Miyoko's doesn't; it's a cashew-based butter that can melt and be used for baking.

WayFare Dairy-Free Salted Whipped Butter is another one. This is certified Kosher, so probably the one for you if you're Jewish. The original flavor is salted butter, but you can also get Sweet Cinnamony and Garlic flavors.

Nutiva Organic Coconut Oil With Butter Flavor is somewhat different, but lots of people love drizzling it on their popcorn. It's basically just coconut oil with a vegan butter flavoring.

WHY VEGAN BUTTER IS BETTER

Just as a quick clarification for anyone who doesn't know, there is a difference between being a vegetarian and being a vegan. Vegetarians don't eat meat, but they generally don't have any hard rules about other animal-based products, such as milk. Vegans eschew all foods that come from animals, including both meat and dairy.

Many people like to turn a blind eye to what happens in the meat and dairy industries. A lot of people also think that being vegetarian means that you're not participating in the harming of animals. After all, you're not actually eating their meat, and how much can it possibly hurt them just to consume their milk?

The answer may surprise you, and not in a good way. The truth is that if you live on a farm and treat all of your animals humanely, milking your cows and consuming the product isn't that harmful. However, that's far from what happens in the dairy industry. 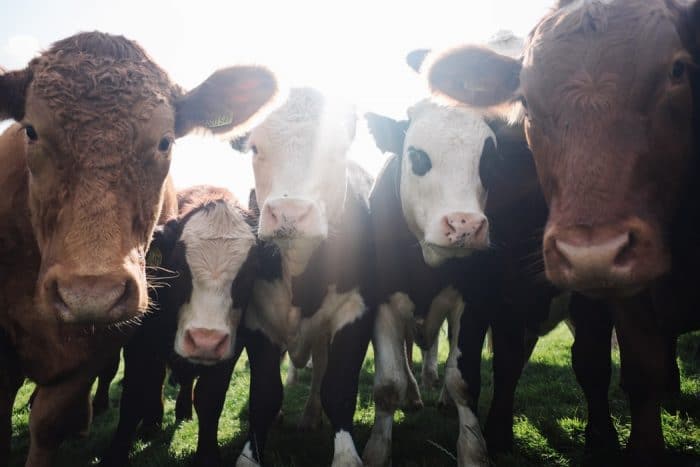 Photo by Robert Bye via Unsplash

Mother cows are often artificially inseminated in order to become pregnant in the first place. This is really stressful for the mother cow and a highly invasive procedure.

Farmers mechanically take semen from a bull. Then, they force the female cow into a mechanical trap, known as a "cattle crush," and forcibly impregnate her. The procedure is often brutal and painful for the cow.

Babies ripped away from their mothers

After carrying their calves for nine months, the calves are usually forcibly taken away from their mothers just a few hours after birth. As it would be for a human mother, this is incredibly difficult for the mother cow. Many even spend time looking for their babies in vain, bellowing and crying for days.

And the cycle continues...

Male calves are either killed instantly or killed a few months later for veal, after being bound and forced not to move their whole short lives (which keeps their meat tender). And female calves are raised to become mothers themselves. Then, they're forced to give birth, have their babies ripped away, and produce milk for about five years until the industry has no more use for them and sends them away to be slaughtered.

In fact, we can argue that the dairy industry is even crueler than the meat industry. Cows are kept in terrible conditions and used their whole lives, with female cows continually having to give birth and have their babies stolen over and over again.

A reason to choose vegan butter

Since manufacturers need the milk that is a result of this horrific process in order to make butter, you can't eat regular butter without supporting this process. Of course, that's one great reason to switch to vegan butter!

HOW TO MAKE YOUR OWN VEGAN BUTTER 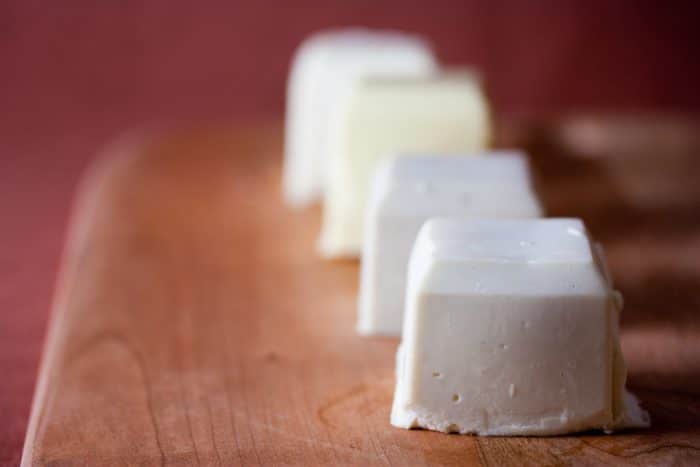 "What is vegan butter?" is a question that has a few different answers. You can buy great vegan butter at the store. There is a huge range of options, and you can almost certainly find one that you'll like.

Alternatively, if you're someone who enjoys simple projects in the kitchen, there are options here as well. You'll be happy to know that you can make your own vegan butter. It's quick and simple.

There are plenty of ways you can make vegan butter in your kitchen. The following is just one simple recipe.

There are a few things you'll need to make this delicious vegan butter. They include the following:

Make sure that you use refined coconut oil and not extra virgin coconut oil for this recipe.

First, melt the refined coconut oil. Then, put it into your blender. Also, add in the canola oil.

In a separate bowl, mix the apple cider vinegar with the unsweetened almond or soy milk. Stir these ingredients well, until they curdle into buttermilk. Then, add this mixture into the blender.

Add the nutritional yeast, salt, and turmeric into the blender. Then, blend all of the ingredients until the mixture is uniform and smooth.

Pour the blended mixture into a butter dish. Refrigerate your vegan butter until it's solid. Once it's solid, it's ready to enjoy.

When you do decide to use it, give it a few minutes to warm up out of the fridge. This will be helpful whether you're going to spread it on bread or rolls or use it for baking purposes.

As you can see, there are a lot of benefits to choosing vegan butter over regular butter. It can taste just as great, and it's better for you in many ways. Also, you can enjoy your food, knowing that there was no animal cruelty that was necessary for it to come to your kitchen.

There are many great options when it comes to vegan butter. You may have asked before, what is vegan butter? Because manufacturers haven't generally marketed margarine as vegan butter, it might have been surprising to realize that margarine is most of the vegan butter out there.

Not only can you find great vegan butter options in the stores, but you can also make it yourself. It's a quick and easy recipe, and it's definitely worth the effort. "What is vegan butter?" is a great question, and the answers will lead you to a world of culinary delights!

What's your take on our answer to the question, what is vegan butter? Share what you think in the comments section!

Samuel Warde
Previous Post: « Best Vegan Multivitamin Options To Maintain Your Health
Next Post: The Beginner’s Guide on How to Go Vegan Without Losing Your Sanity »