If you’re looking to eliminate animal products from your diet, you might be wondering “what is the difference between vegan and vegetarian?” Your question makes perfect sense. And you’re by no means the only person seeking an answer.

Both vegans and vegetarians don’t eat meat, whether because they’re looking to improve their health, help the environment, or eliminate animal cruelty. However, that’s pretty much where their similarities end.

What Is the Difference Between Vegan and Vegetarian?

There is one core difference between vegans and vegetarians. Vegetarians refuse to eat animal flesh. On the other hand, vegans don’t consume any products that contain animals, or animal by-products. 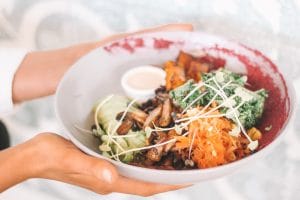 However, when answering “what is the difference between vegan and vegetarian?” it is necessary that we mention the fact that there are different types of vegetarians out there.

Those who are not yet ready to give up animal flesh completely are known as flexitarians. They eat meat, but only sometimes.

Are you confused yet? Because the labels don’t end there.

Can’t give up eggs but don’t care much for cheese? Then you’re probably a “vegan.” Vegans only eat eggs that come from hen sanctuaries. These sanctuaries look after hens that are too old for commercial laying.

At a glance, a vegan diet is a strict form of vegetarianism.

But that’s just scratching the surface.

It’s Not Just a Difference in Diet

A short answer to “what is the difference between vegan and vegetarian” is this: vegetarianism is a diet whereas veganism is a lifestyle.

Vegetarians and vegans tend to give up animal products for similar reasons. These include health, environment, and animal well-being. The difference is the degree to which they deem animal products acceptable.

Vegetarians hate the idea of slaughterhouses.

In contrast, vegans believe that all commercialization of animals is inhumane. In an ideal vegan world, animals would be completely free from human use.

You are what you eat

We can’t avoid discussing diet when answering “what is the difference between vegan and vegetarian?”

Vegetarians don’t consume any products, or by-products, of slaughter. In other words, they don’t eat meat, poultry, fish, and seafood. But they do eat animal by-products such as milk and eggs.

Animals exploited for dairy, eggs, and even honey lead horrendous lives. And vegans refuse to support these industries.

Artificially impregnated cows have no reprieve. To make matters worse, they’re separated from their calves immediately after giving birth. This separation causes distress both to the mother and the child.

Indeed, a large number of vegans believe that dairy production is less ethical than meat production. Some even say that there’s more cruelty in a glass of milk than a pound of beef.

Egg production is just as barbaric. Hens live in overcrowded cages while male chicks are shredded to pieces alive.

As for honey: selective breeding of honey bees reduces the population gene pool. That, in turn, increases the risk of disease.

Furthermore, beekeepers cull the hives post-harvest and clip the wings of Queen bees.

Finally, sugar substitutes that farmers place inside hives lack essential micronutrients and are bad for the bees’ health.

Who is healthier: vegans or vegetarians?

Both vegan and vegetarian diets are healthy as long as they’re balanced.

Nonetheless, both vegans and vegetarians might need to take supplements. One such supplement is B12. Omnivores get B12 from animals.

In general, it appears like vegetarians get more vitamin B12 than vegans.

On the other hand, vegans may have a lower risk of developing heart disease, type 2 diabetes, and cancer than vegetarians.

If you went shopping with a vegan and a vegetarian, you’d quickly find out the answer to “what is the difference between vegan and vegetarian?”

Most people are well aware that animal fibers such as wool, silk, down, and fur are used in the apparel industry. Furthermore, shoes and belts are at least partially made of leather.

Vegans believe that these materials are tied to exploitation and suffering.

Most leather comes from cows killed for milk and beef. As such, this leather is a coproduct of meat and dairy industries.

Besides that, leather is bad for the environment too. The toxins employed in the tanning process pollute planet Earth.

Instead of supporting murder for fashion, vegans opt for vegan leather. Fun fact: you can actually make very realistic-looking leather from mushrooms!

Wool, shearling, cashmere, and angora are also big no-nos for vegans. Why? Because they come from abused and killed animals.

Sheep grow just enough fur to protect them from extreme temperatures. Shearing them is unnecessary.

Moreover, in the wool industry the tails of sheep are sometimes chopped off, their ears hole-punched, and the males castrated.

As for fur: to kill an animal for a trendy fur-trimmed jacket is inconceivable to vegans.

Finally, we have silk and down feathers.

Silk is the fiber that silkworms use to craft their cocoons. We use it to make gorgeous dresses and shirts.

Down is the layer of feathers close to a bird’s skin. These feathers make for comfy puffy jackets, bedding, and pillows.

While some vegetarians refuse to purchase fur coats and leather boots, vegans avoid all animal-derived apparel.

Do vegetarians smell better than vegans?

It would make zero sense if vegans avoiding all animal products only to slather their faces in moisturizers that contain shark liver oil, wear deodorants tested on animals, and paint their nails in glittery nail polish made from fish scales.

But does that mean that one of the answers to “what is the difference between vegan and vegetarian?” is that vegetarians, just like omnivores, smell and look better than vegans?

Sure, vegans refuse to tolerate animal cruelty. But that doesn’t mean that they stink, are hairy, or can’t wear makeup.

They do however have to be more careful when purchasing personal care items than vegetarians.

Just because a product is vegan doesn’t mean that it wasn’t tested on animals. Similarly, cruelty-free products can contain traces of animals.

But it’s not all bad news.

Vegan personal care products and cosmetics are a growing trend.

What’s more, the ingredients in vegan personal care products are very natural. Instead of irritating the skin, they nourish it. It’s no wonder that meat-eaters are stocking up on vegan self-care products.

Animal sanctuaries above zoos and aquariums

Personal views on animal entertainment are another factor that influences the answer to “what is the difference between vegan and vegetarian?”

For ethical reasons, vegans avoid zoos, circuses, and other places that exploit animals for entertainment.

Some vegans won’t even watch movies that feature animals.

Instead, vegans choose to visit animal sanctuaries that attempt to provide animals with a safe home.

Most vegetarians, on the other hand, have no qualms about visiting animal attractions.

Being a vegan is not so simple.

Learning what’s vegan and what isn’t is a life-long process.

To their astonishment, vegans are continuously discovering that the products they use daily contribute to animal suffering.

For example, some beers and wines use egg whites, gelatin, or isinglass. Most paintballs have an outer coating of gelatin whereas high-end candles contain beeswax. Tattoo ink often consists of bone char, gelatin (from hooves), glycerin (from animal fat), or shellac (from beetles).

Thought you were safe eating fruits and veggies? Not so fast. Casein, shellac, or beeswax coat many greens available in grocery stores.

Additionally, most medication is tested on animals.

Vegans try their very best to avoid all animal products and animal cruelty.

At the end of the day though it’s impossible to be a “perfect vegan.”

Furthermore, boycotting products that contain trace amounts of animal products can actually be harmful, not beneficial.

A Step in the Right Direction

The answer to “what is the difference between vegan and vegetarian?” is pretty straightforward. Vegetarianism is a diet. Veganism is a philosophy.

When most people find out the answer to “what is the difference between vegan and vegetarian?”, they begin to view vegetarianism as a stepping stone to veganism.

It’s hard to give up all animal products overnight. Eliminating meat, then dairy and eggs, and finally, other animal products, is much easier. For most people, it’s also more sustainable.

Regardless of whether you’re an omnivore, a vegetarian, a vegan, or something in between, know this: by giving up meat or even reducing the amount of meat that you eat, you’re making a world of difference.