It’s time to take a look at Domino’s menu as it became such a trend lately. All our non-vegan friends are excited for a movie night because it implies ordering pizzas and they just love the cheezy and delicious Domino’s ones. So, I started considering the vegan options at Dominos too.

One night, my boyfriend and I were far from home, in a motel and we had no restaurant options near us. So, we had to order a pizza from Domino’s for dinner. To our surprise, we were able to customize our pizzas very easily using their online ordering system. Another benefit of this system is that it also includes an order tracker. Pretty neat!

Therefore, within no time we had our delicious veggie pizza and they even gave us extra vegetables since we did not order cheese. That surely was a nice touch for all the vegans out there. Also, I learned to make sure I check for specials before ordering my usual, as they always have something going on. 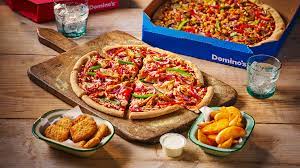 Your Vegan Options at Domino’s

First of all, we want to mention that none of Domino’s products is 100% vegan, because of the animal traces. Like many other fast-food chains that have been discussed here, they cannot really guarantee that all their products will be 100% free from animal products. But that is understandable for me, regarding how time-consuming that process would be.

“Domino’s stores will endeavour to provide vegan pizzas if requested by you, but traces of meat and dairy products may be unintentionally present in food due to cross-contamination during store operations. We cannot guarantee that all vegan pizzas will be 100% free from animal products.”

This has been clarified, let’s see what vegan options has Domino’s to offer!

Other Vegan Stuff at Domino’s

Just an FYI, our experience with vegan pizzas started with Pizza Hut. In spite of what you may believe, we still prefer it.

First of all, the price makes a big difference. Although Pizza Hut seems to be cheaper, it has more specials with larger pizzas, so you get more bang for your buck. Secondly, can you believe that crust? Even though it is super delicious and not dry at all,  Pizza Hut’s crust also holds together way better.

On the other hand, the pizza we got from Domino’s had a thin crust and because there was no cheese on it, the pieces were all bunched up in one corner of the box. It was still edible but I guess the cheese is what prevents it from doing that.

Other than those two things, I’d say they are both good places to get vegan pizza from when you don’t have any other option. Luckily we live 10 minutes from Portland and there are plenty of options for us now. Also, here is a list of vegan options at Pizza Hut in case you’d like to compare the two for yourself.

Last helpful advice from us, but surely not least, keep in mind that their menus may differ from where they are located. So, it will be a good idea to check out your local Domino’s vegan options.

What Is Your Favorite Vegan Option at Domino’s?

Finally, we will be super excited to find out more about your experience with the vegan options at Domino’s. I’m aware that that the quality of the order delivery may differ because of the employees. Some friends had some issues regarding this matter some time ago. So, had you experienced any sloppy behavior at Domino’s? What do you think of their vegan options? Are they enough for your vegan belly? How was your entire experience with their service? Tell us anything!

Also, don’t hesitate to ask any further questions in the comment sections. We are here for all our vegan loves!