I’ve mentioned in a previous post that I had bought a bunch of Gardein products that were on sale and one of them was a bag of The Ultimate Beefless Ground. I decided they would work perfectly as a substitute for ground beef in a Jamaican beef patty. It’s been at least 10 years since I’ve had one these pastry delights, so I was excited to try my hand at making a vegan version of it. It is not a complicated process, per se, but it does take some time and patience to get right. The work required for this recipe is worth it though, because the end result is wonderful. 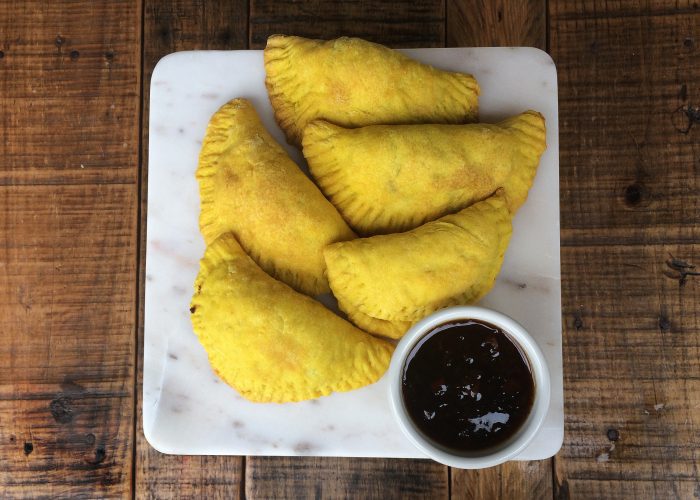 For those that don’t know, a Jamaican patty is a savory pastry normally filled with ground beef, but is sometimes filled with fish, vegetables, chicken, pork or soy. The flaky pastry is colored using turmeric powder, or sometimes an egg yolk mixture to give it a beautiful golden yellow hue. The filling is spiced with curry, cumin and coriander among other spices and herbs.

To give it heat, traditionally a Scotch Bonnet pepper is used but, I was unable to find them at my local supermarket, so I used a Habanero pepper instead. Both peppers belong to the same family, so they are very similar, but the Scotch Bonnet is slightly sweeter which lends itself well to the spiciness and overall flavor of the filling. To adjust for the lack of sweetness from the Habanero, I served my patties with some chutney, which is sort of a savory and sweet jam-like sauce that can be found in many parts of the world, including the Caribbean and Jamaica. 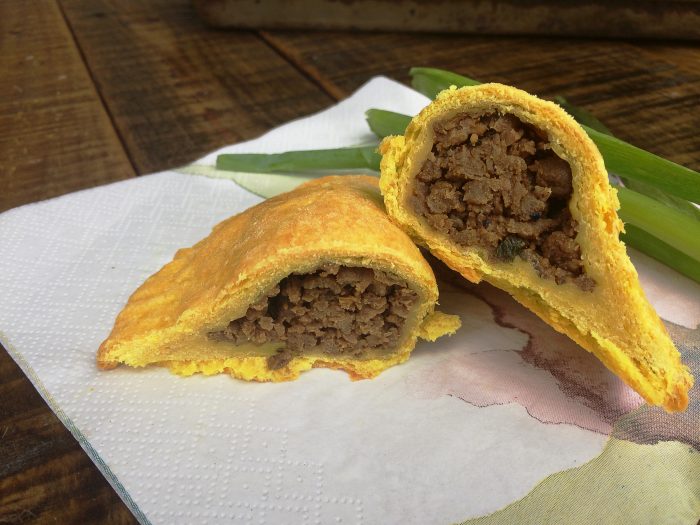 Jamaican patties are a food whose origins are multicultural and are influenced by a variety of cooking styles. They originated in Jamaica, of course, after Cornish pasties were introduced during European colonialism of the Caribbean. Indentured servants from India brought with them the curry, cumin and coriander, which merged with the cooking style of the slaves from Africa, who brought cayenne pepper with them. This food exemplifies the evolution of cooking as different cultures were forced to inhabit the same land and resulted in shared recipes and ingredients with one another. 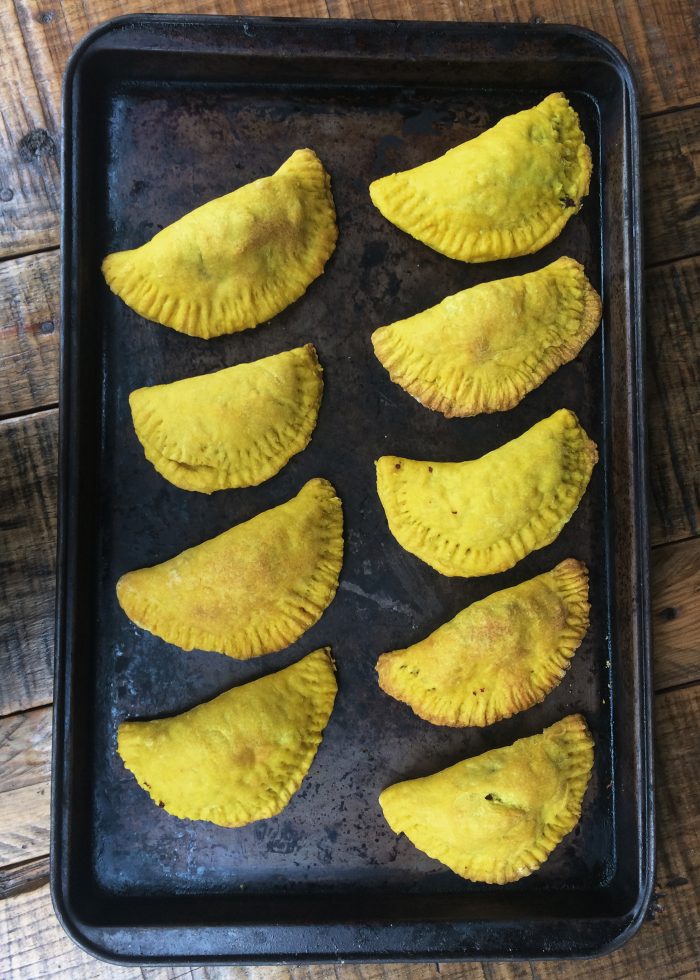 Jamaican patties were introduced to the U.S. during the 1960’s and 1970’s when waves of Jamaican health care workers immigrated to New York and brought their recipes with them. Today, they are popular in many large cities around the world that have large West Indian populations, and they are increasing in popularity as a street food in the U.S., Canada, and England. 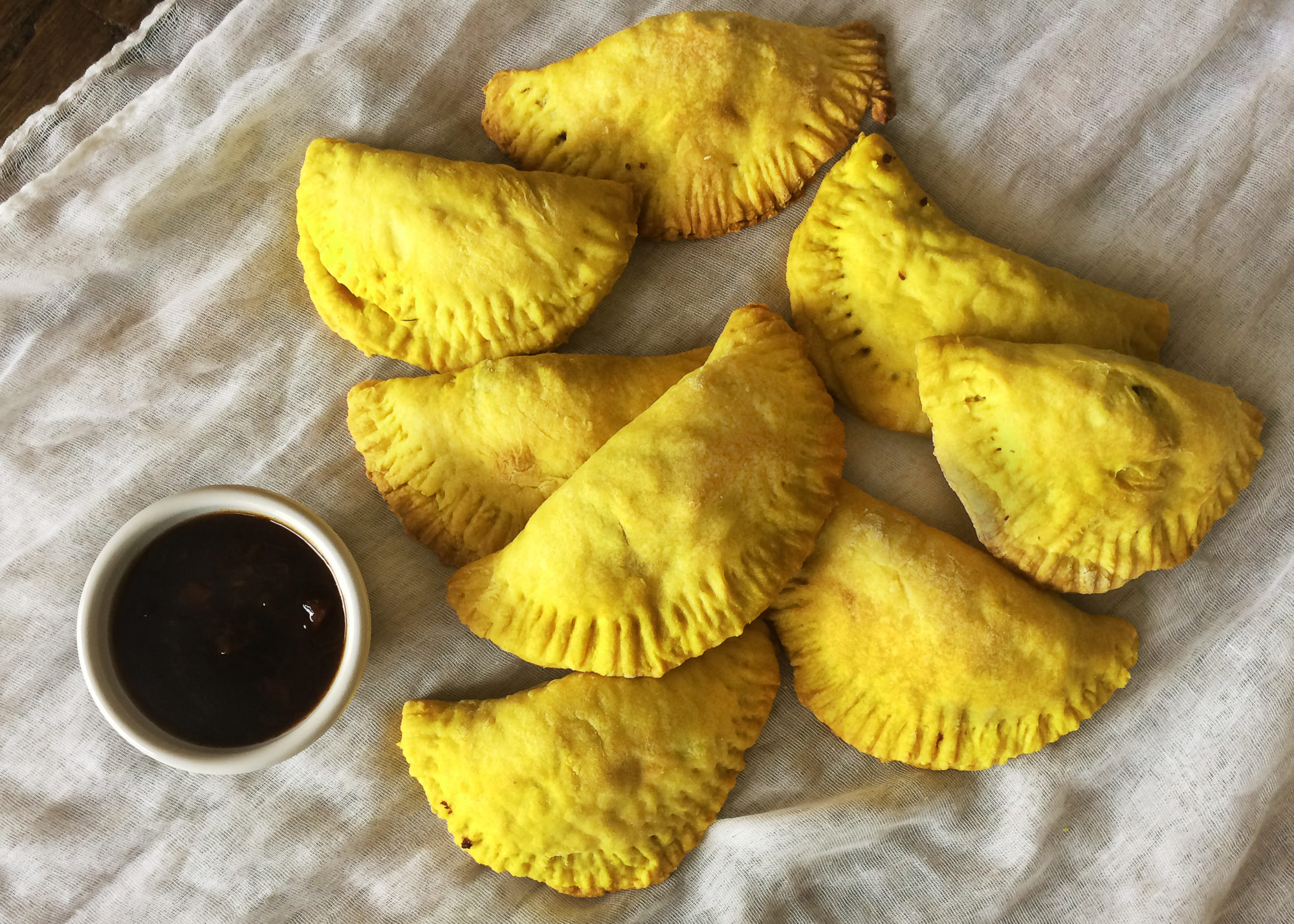 For the dough
For the filling

The traditional Jamaican beef patties use Scotch bonnet peppers, but I was unable to find them at my local grocery store, so I used a habanero pepper instead. If your dough is too sticky and hard to work with, refrigerate it for a longer time, but try not to over mix it or add too much extra flour, because the pastry will come out too dense and chewy.