This morning we decided to go out for brunch, which is something we don’t normally attempt on a Sunday morning because we hate waiting in line for 45 minutes early in the morning while we’re famished, but we felt like treating ourselves. We decided to go to A.N.D. Cafe, an all vegetarian restaurant located in SE Portland, OR.

A.N.D serves typical cafe fare with a twist. Most of the dishes are familiar but inventive, and everything on their menu is vegan except for two items: Tillamook cheese and poached eggs. They also have many gluten-free options. Today was the second time we’ve been to A.N.D. Cafe, and both times our meals have been unconventional, tasty, and satisfying.

One of the first things you might notice upon visiting A.N.D is that their breakfast entrees are not your run-of-the-mill vegan breakfast choices. Instead of basic tofu scrambles, pancakes, and fruit plates, you’re more likely to find burritos, quesadillas, and savory waffles. I think this is a big plus because when I go out to a restaurant, I like to get something I couldn’t, or wouldn’t, easily make at home. Paying $7.50 for some scrambled tofu sauteed with peppers and onions always feels like a ripoff. That is not the case at A.N.D.; their meals are unique and full of interesting ingredients and flavors.

What We Ordered for Brunch

The first time we went to A.N.D. Cafe I had their “super vegano burrito” and Taryn had the biscuits and gravy. Both dishes were awesome, but I’m not going to review those items in depth because it was a long time ago, I was not in “review mode” at the time, and we didn’t get any good pics. But for whatever it’s worth, both of those items get a thumbs up. This time around, I had the “full nest” and Taryn had the “feast waffle.” 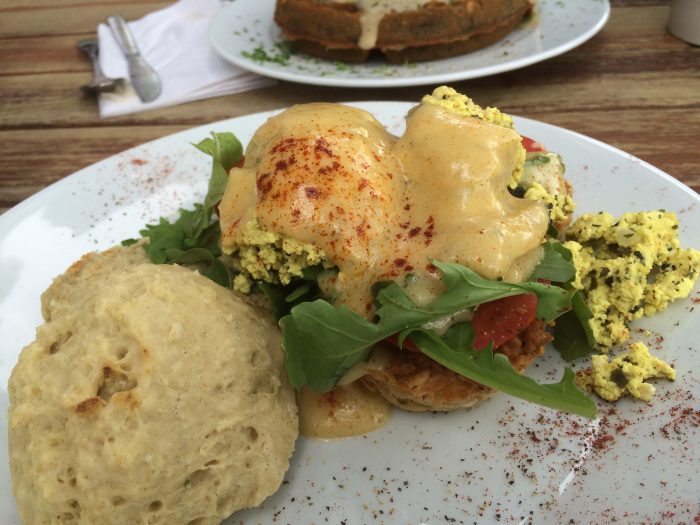 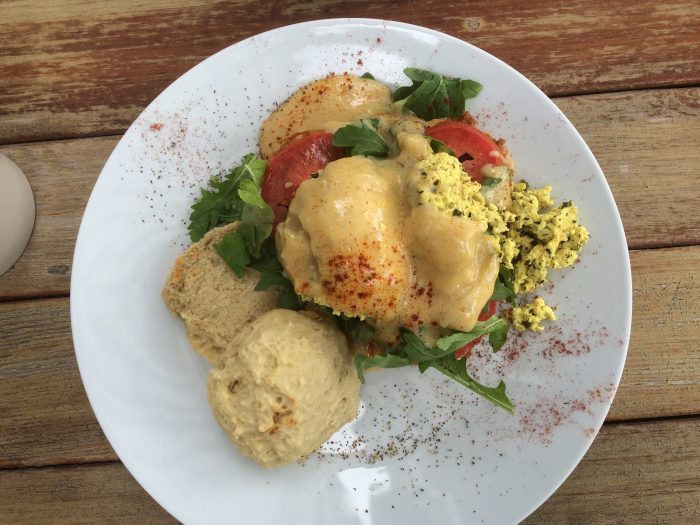 The “full nest” is three hash brown baskets topped with veggies, herbed tofu, and hollandaise sauce served with a biscuit on the side. While this might sound somewhat standard, the flavors were surprisingly complex and interesting. It’s not uncommon for me to completely drown my food in hot sauce, especially breakfast foods, but while I was eating this I tried not to go overboard with the hot sauce so I could actually taste the food itself.

Taryn said she wasn’t crazy about the hollandaise sauce, but she also admitted she’s not a big fan of hollandaise in general. She couldn’t pinpoint what it was specifically that she did not like about it, she simply noted it was “weird.” I, however, liked the hollandaise sauce and I thought the whole dish was great. Everything was cooked perfectly, the flavors were bold but not overwhelming, and the portion was just the right size. 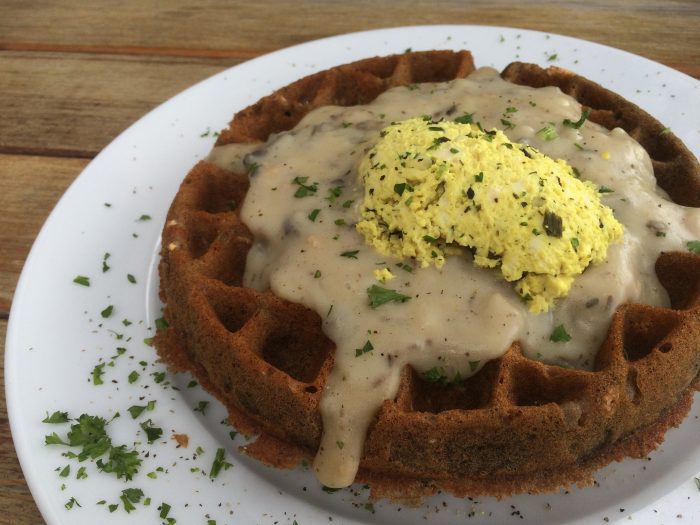 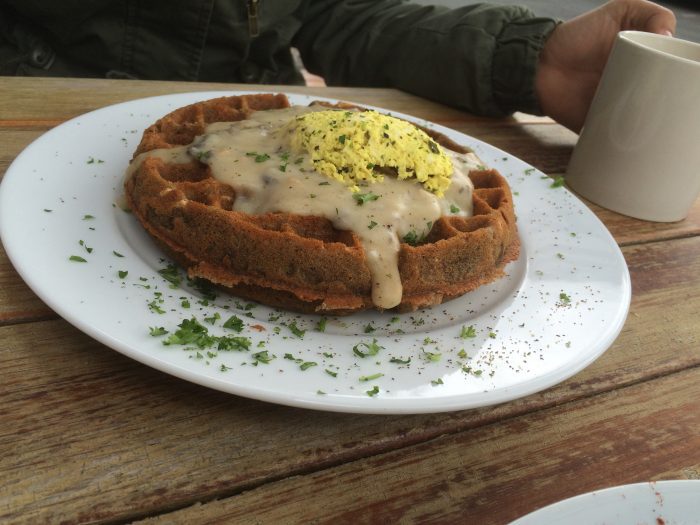 We used to run a vegan waffle food truck, so we sort of like to think of ourselves as waffle connoisseurs. It’s not easy to make good waffles. You’d be surprised how many places can’t pull it off. We both agreed A.N.D. did a fine job on the waffle itself. It had just the right texture – crispy on the outside, soft and chewy on the inside. The batter was interesting because it was slightly sweet but flavored with savory herbs and spices.

The waffle was topped with country gravy and herbed tofu, both of which were delicious. However, the waffle was supposed to be stuffed with vegan cheese, sausage, and hashbrowns, but as far as we could tell, none of that stuff was included. We wondered if by “stuffed” they meant those fillings were incorporated into the batter; but if they were, they were not noticeable.

The waffle was still very tasty and quite filling, nonetheless.

We both strongly recommend A.N.D. Cafe, even if you’re not a vegan. Although it’s a totally vegetarian restaurant, it’s still the kind of place you could take a meat-eater without them complaining that you’re forcing them to eat “rabbit food.” If you want to treat yourself to a better-than-average brunch, definitely give this place shot.