When we think of animal testing, most of us picture dark laboratories with outdated equipment and cruel scientists. Unfortunately, you might be surprised to know how many makeup brands that test on animals there are to this day.

As awareness of issues like factory farming, the fur trade, and animal testing has risen, the demand for cruelty-free makeup has grown as well. In fact, there’s never been a better time to shop for vegan, cruelty-free cosmetics than right now.

Despite this, many of the world’s largest cosmetic companies have resisted the switch to cruelty-free practices. Or, worse yet, they disguise their animal testing behind feel-good labels and deceptive wording.

It shouldn’t come as a surprise that large makeup companies want to hide their use of animal testing and other unethical practices. If they were upfront about their use of testing, they would lose countless customers. But this lack of straightforward information also makes it incredibly difficult to know which brands are free of animal testing.

The History of Animal Testing

So why are animal testing and the beauty industry so intertwined? Well, it all started with medical research.

Not long ago, doctors were just beginning to understand the inner workings of the human body. While cadavers offered some understanding, a living body offered even more. The practice of cutting open and investigating a living body came to be known as vivisection.

Since vivisection of a human body was so looked down upon (but definitely not unheard of), scientists turned their attention to animals. While records of scientific vivisection date back to Ancient Greece and beyond, this practice continued to pick up steam into the 19th and 20th centuries.

Of course, not everyone turned a blind eye to the treatment of these research animals. Perhaps the most famous historical example of animal rights activists and scientists coming head-to-head is England’s Brown Dog Affair in the early-1900s.

Sadly, this battle still rages on today, since medical vivisection and similar practices have not been outlawed in many major countries. And animal testing certainly isn’t limited to the medical field.

Animal testing and the beauty industry

As the 20th century carried on, the developed world started to become more aware of consumer safety. While this offered many benefits, it also brought forth a new era of animal testing and suffering.

In 1906, Upton Sinclair’s “The Jungle” taught society to be more aware of how their food was processed, bringing new federal laws into existence. And in 1938, the United States Food, Drug, and Cosmetics Act was the first law to require safety testing of drugs and cosmetics. These tests, of course, used animal subjects.

The end of animal testing

For decades, these tests were considered the best option for consumer safety. But finally, in 1998, the U.K. banned cosmetic animal testing. Then, between 2004 and 2013, the European Union (consisting of 28 countries) banned animal testing on all cosmetic ingredients and products.

While dozens of countries have banned animal testing in recent years, the United States is slow to follow. As of 2018, California is the only state to ban all animal-tested products. Hopefully, once this law goes into effect in 2020, we’ll see more states follow suit.

Some proponents of animal testing claim that these tests are necessary to keep consumers safe. But since cosmetics are a luxury and not a necessity, there is really no excuse for makeup brands that test on animals to continue this practice.

How to Identify Cruelty-Free Makeup Brands

Maybe you’re ready to make the switch to 100 percent cruelty-free makeup. Or maybe you’re just curious about the major makeup brands that test on animals. Either way, there are some easy (and not-so-easy) ways to tell if a product is cruelty-free.

Fortunately, we live in a time when animal testing practices are heavily criticized. If you’re ever not 100 percent sure if a company is truly cruelty-free or not, a quick Internet search is often all it takes to find out! 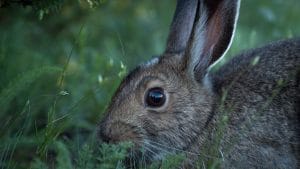 The bunny label has become an icon of the cruelty-free movement. Some vegans and animal rights activists even have this symbol tattooed on their skin.

The most common bunny label, at least in the U.S., is Caring Consumer’s pink cruelty-free bunny logo. This logo is backed by Peta and indicates that the company does not “conduct, commission, or pay for” any animal testing of their products.

However, you want to remember that not all companies with this logo are vegan (but, there is a separate logo that differentiates products that are both cruelty-free and vegan). Also, there is little oversight when it comes to companies using this logo. If you have any concerns about a given company, we recommend digging deeper with your own research.

In Australia, you’ll find the CCF Rabbit logo on some products. This logo ascertains that the company does not test on animals in any way, as well as that it doesn’t use any animal products or byproducts that result in the animal’s death.

While products with the CCF Rabbit are vegetarian, they are not guaranteed to be vegan. Again, there is no in-depth auditing system to ensure companies meet the label’s requirements.

Unfortunately, products with the Leaping Bunny logo are not always vegan.

While most major cosmetic companies advertise if their products are vegan or cruelty-free, much smaller, independent companies do not. If you’re interested in trying one of these small brands (and we definitely encourage you to do so), the best course of action is to contact the brand directly.

Of course, you might not always get a satisfactory response. If that’s the case, you’re best off moving on to another brand on your list.

Find out if they sell in China

One of the most frustrating things for any vegan or animal rights activist is to find a company you love, find out they don’t test on animals, but then find out they sell their products in mainland China.

Why is this an issue? Because China requires cosmetic animal testing for all products.

Since China is one of the largest consumer markets in the beauty industry, many companies are willing to sacrifice morals for a piece of the pie. And while China has become a bit laxer in its animal testing laws, they’re far from getting rid of them entirely.

Be careful when researching makeup brands and their animal testing policies. Many major companies claim they don’t test on animals, except where required by law. But if you ask us, those two statements are mutually exclusive.

You either do, or you don’t test on animals. There is no in-between.

The Most Popular Makeup Brands that Test on Animals

Now that we’ve bogged you down with information on animal testing and where it all started, you’re probably wondering about the major makeup brands that test on animals, and you should avoid them. Sadly, there are many.

If your goal is to invest in 100 percent cruelty-free makeup, we recommend doing thorough research on any product you buy. Even if a company seems on the up-and-up at first (as some of the makeup brands that test on animals below do), you’ll often find the truth is not so great.

Some of L’Oréal’s sub-brands include Maybelline, Lancôme, Urban Decay, Garnier, and Essie. Unfortunately, this means that all of these companies are makeup brands that test on animals.

In regards to their stance on animal testing, L’Oréal is one of those companies that claim to not test on animals except where required by law. Since L’Oréal sells in the Chinese market, this means the brand does, inherently, test on animals.

While MAC Cosmetics isn’t as big as it once was, the brand is still one of the leaders in the beauty industry. Unfortunately, MAC Cosmetics is another of the major makeup brands that test on animals.

MAC Cosmetics claims to use human volunteers for their safety testing in most countries. However, they also admit that they allow animal testing in the Chinese market so that they don’t exclude any of their fans. If you ask us, though, animal testing is an unfortunate price to pay for lipstick or eyeshadow.

If there’s any cosmetic brand that can rival L’Oréal’s hold on the industry, it might be Estée Lauder. Although the namesake product line mostly lives in department stores, Estée Lauder has partial- or full ownership of many of the largest makeup brands around (including the just-mentioned MAC Cosmetics).

The list of Estée Lauder subsidiaries includes BECCA, Bobbi Brown, Clinique, GLAMGLOW, Smashbox, Too Faced, Tom Ford Beauty, and La Mer. As an extension of Estée Lauder, these are all skincare or makeup brands that test on animals.

Again, Estée Lauder claims to not test on animals. But they also sell their products in mainland China and adhere to their animal testing requirements.

There are countless makeup brands that test on animals. But perhaps the most controversial is NARS. Why? Because Nars was previously cruelty-free, until 2017 when it decided to start selling its products in China.

Overnight, a major cosmetic brand that was once a favorite among animal rights activists turned its back on them. Unsurprisingly, many still hold a grudge against the company for this decision.

In many cases, the most affordable brands are also the most likely to be cruelty-free. This is not the case, however, for the Sephora Collection. This brand, sold as the store brand in Sephora stores and online, tests on animals.

For some people, this could also mean avoiding shopping at Sephora altogether. After all, should you support a retailer that heavily advertises clean and ethical beauty when its very own brand isn’t cruelty-free? The decision is up to you.

If you’re still looking for a budget-friendly makeup brand, e.l.f. Cosmetics is a cruelty-free alternative that you can find in many drugstores. Other high-quality but affordable options include Wet’n’Wild and Pixi.

While some beauty enthusiasts avoid Mary Kay because of their company structure, others swear by these products. However, Mary Kay is another of the top makeup brands that test on animals.

Sadly, Mary Kay was one of the pioneers against animal testing in the beauty industry. In recent years, though, this has changed.

One of the biggest concerns about Mary Kay is that consultants often lie (either purposely or through ignorance) about the company’s stance on animal testing. Some of this confusion might be a result of Mary Kay switching its cruelty-free status when deciding to sell in China. But official sources prove that the company does currently test on animals.

How You Can Help End Animal Testing

As a consumer, whether that be of cosmetics, food, clothing, or anything else, your money is often the best way to ensure the companies hear your voice. By avoiding spending money on makeup brands that test on animals, you can help share the message that these practices are not okay. And, most importantly to the companies, that these practices will not earn them a profit.

What are some of your favorite cruelty-free makeup products? Do you have any hidden gems that are vegan and cruelty-free? Let us know about them in the comments below!