If you have a sweet tooth and you're thinking of giving up all animal products, you probably have only one thing on your mind: "Is chocolate vegan?"

Quick Navigation
IS CHOCOLATE VEGAN?
CHOCOLATE 101
NOT ALL CHOCOLATES ARE THE SAME
DARK CHOCOLATE IS NOT JUST FOR CHOCOLATE SNOBS
MILK CHOCOLATE BRINGS US BACK TO OUR CHILDHOOD
WHITE CHOCOLATE IS NOT REALLY CHOCOLATE
SNEAKY INGREDIENTS GIVE VEGANS A HEADACHE
WHAT'S THE DEAL WITH DRINKING CHOCOLATE?
VEGAN CHOCOLATE IS A THING
GOING VEGAN DOESN'T MEAN GIVING UP LIFE'S LITTLE PLEASURES

Your question is a reasonable one. After all, most of us can't imagine giving up this sweet treat forever.

It's what we nibble on when we're hungry, what we gift our loved ones on special occasions, and what we drink on chilly winter afternoons.

For most of us, leaving chocolate behind as we embark on our vegan journey is not an acceptable option.

Luckily, we don't have to eliminate chocolate from our diets entirely.

But before we answer "Is chocolate vegan?" let's take a look at chocolate's history. As it turns out, this obsession with chocolate is by no means recent.

Chocolate has been around for at least 2,000 years, if not more. In pre-modern Latin America, cocoa beans were so valuable they were sometimes used as currency.

Cocoa beans also played a part in sacred rituals. The Aztecs even supplied gloomy sacrifice victims with gourds of chocolate to cheer them up.

By the 17th century, fashionable Europeans couldn't imagine their life without chocolate. In addition to appreciating it for its nutritional value, they also revered chocolate for its medicinal and aphrodisiac qualities.

In short: chocolate is and has always been, very popular.

But is chocolate vegan?

Chocolate is made from cacao beans which grow on cacao trees. As such, technically, chocolate is plant-based food. But does that mean that those who avoid all animal products can eat chocolate without suffering pangs of guilt?

By the time that chocolate ends up on the shelves of your local grocery store, it usually contains additives such as sugar, milk, and milk fat.

NOT ALL CHOCOLATES ARE THE SAME 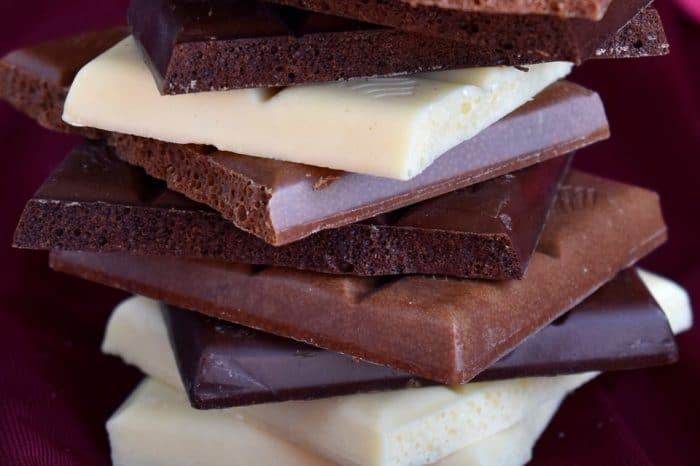 Image by Enotovyj from Pixabay

When answering the question "Is chocolate vegan?", we must look at each category. 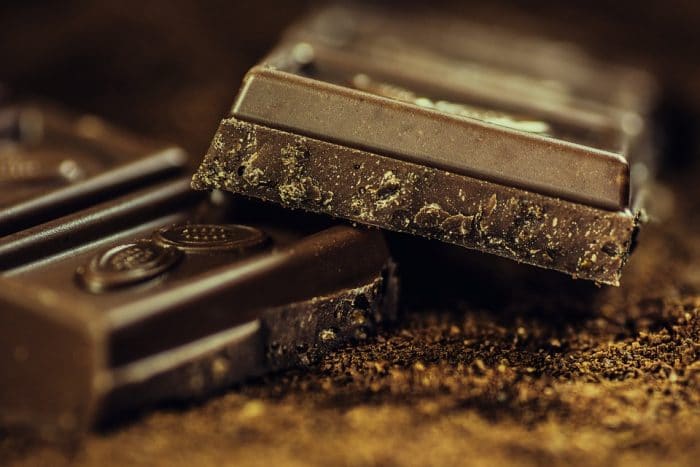 Image by Alexander Stein from Pixabay

Dark chocolate tends to contain a high percentage of cocoa which is what gives it that deep and sophisticated flavor.

Most brands note the exact percentage on the packaging. Typically though, dark chocolate contains anywhere between 45 to 80 percent cocoa.

The higher the percentage, the less added sugar and the stronger the flavor (as well as the bitterness).

Furthermore, some say that the higher the cocoa content, the more beneficial the chocolate!

Dark chocolate supposedly contains organic compounds that function as antioxidants. One study even showed that dark chocolate has more antioxidant activity than juices derived from superfruits.

In general, dark chocolate is linked to lower cholesterol levels, cognitive decline prevention, and reduced risk of cardiovascular problems. Unless you're a chocolate connoisseur, you'll probably want to stay away from chocolate in the 90 percent range.

Most high-quality dark chocolates contain no added ingredients except for sugar and vanilla.

As such, the answer to "Is chocolate vegan?" is most likely yes, provided that the chocolate in question is high-quality dark chocolate.

However, that's not always the case.

Be extra careful with dark chocolates that contain toffee, caramel, peanut butter, and other inclusions. They're usually not suitable for those who follow a plant-based diet.

On the other hand, dark chocolate that contains dried fruit, almonds, and mint is usually safe (but read the label nonetheless).

MILK CHOCOLATE BRINGS US BACK TO OUR CHILDHOOD 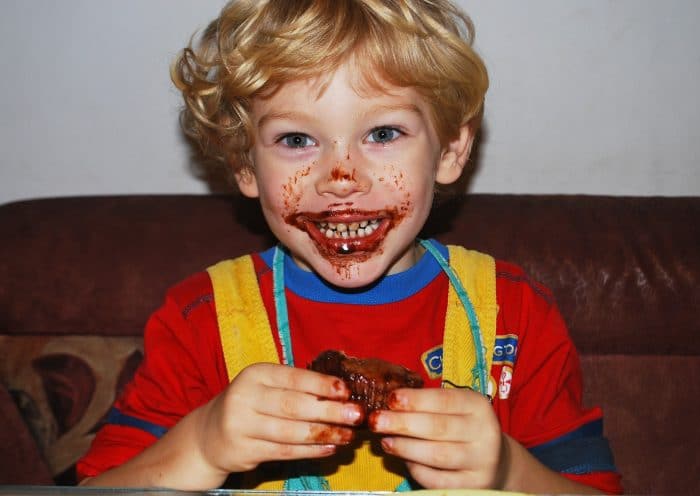 Image by Mojca JJ from Pixabay

Milk chocolate is a blast from the past. It's what we all craved when we were little kids. The creamy texture, the light brown color, and the milky taste will forever bring us back to our childhood days of innocence.

Some of us are still not over milk chocolate yet.

Consequently, in this case, the answer to the question "Is chocolate vegan?" is no. Milk chocolate is rarely ever vegan.

However, that doesn't mean that it's impossible to purchase vegan-friendly milk chocolate made from plant-based milk. You just have to know where to look.

WHITE CHOCOLATE IS NOT REALLY CHOCOLATE 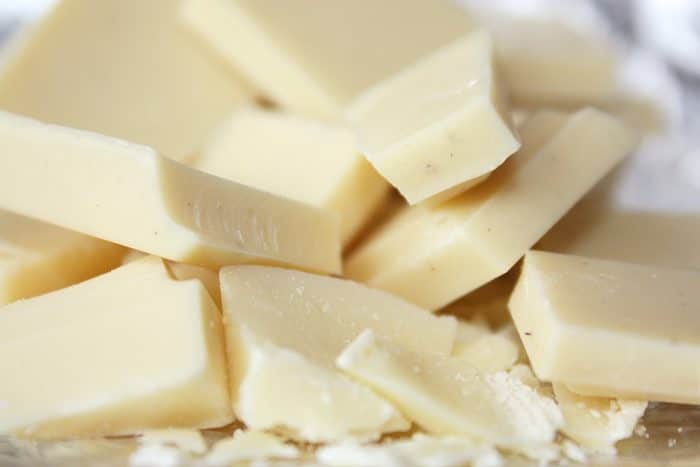 Image by caja from Pixabay

Ever noticed how white chocolate doesn't taste anything like chocolate?

If you look at the ingredients that make up white chocolate, you'll notice a lack of cocoa solids. Instead, white chocolate contains cocoa fats, also known as cocoa butter.

You're probably wondering: What's the difference?

Cocoa solids are responsible for the flavor, color, caffeine and beneficial chemicals in chocolate. Cocoa butter is accountable for chocolate's consistency and bulk.

Essentially, what you're eating is a concoction of dairy products, sweeteners, emulsifying agents, flavorings, whey, spices, and a minimal amount of flavorless product extracted from cocoa beans.

It's no wonder that most white chocolate contains more calories than dark and milk chocolate.

So, when it comes to white chocolate, the answer to "is chocolate vegan?" is a resounding no. Unless, of course, you're eating vegan white chocolate, such as iChoc White Nougat Crisp. And if you're up for a little experimentation, you can also make your own.

SNEAKY INGREDIENTS GIVE VEGANS A HEADACHE 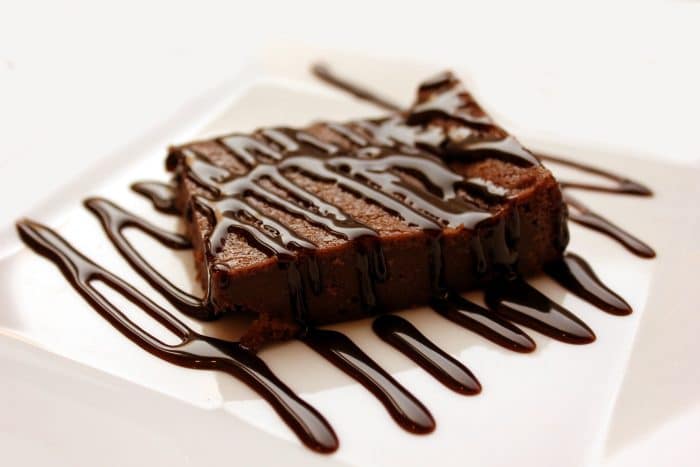 To better understand the answer to "Is chocolate vegan?", we need to take a look at the ingredients most commonly found in chocolate. Ingredients such as cocoa mass, cocoa beans, cocoa solids, cocoa paste, cocoa butter, and chocolate liquor shouldn't cause you much concern.

They're all just terms used to describe pure chocolate, albeit in different conditions of processing.

It's the other stuff you have to worry about.

Brands sometimes like to sneak in dairy products under clever names. As such, you have to be smart when you read labels. In addition to looking for ingredients such as milk, also keep an eye out for milk derivatives such as lactose, casein, and whey.

Not only that, as you study the labels, you're bound to come across lecithin. Lecithin is an emulsifier added to chocolate bars. It comes from both plants and animals.

Soy lecithin is always vegan. So, if you come across soy lecithin while reading the label, you're good to go. Add that chocolate bar to your shopping basket.

But here's the catch: the label might not always mention the source.

If you're unsure whether the lecithin used comes from plants or animals, play it safe and avoid the product altogether.

Also, something to be wary of is that seemingly harmless ingredients, such as "natural flavorings," are sometimes derived from animal sources. For example, some vanilla flavoring comes from beavers.

Basically, the simpler the ingredients (think cocoa, cocoa butter, and sugar), the better the chocolate and the higher the likelihood that it's vegan.

Finally, some chocolate brands make it easier for their customers to spot their vegan-friendly chocolates by adding the Certified Vegan Logo.

WHAT'S THE DEAL WITH DRINKING CHOCOLATE? 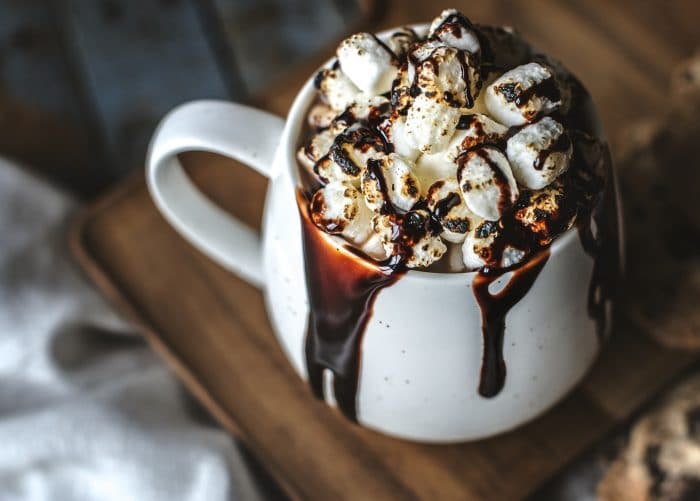 Image by rawpixel from Pixabay

When the question "Is chocolate vegan?" pops into your head, you might not necessarily be thinking of chocolate bars. Instead, you might be pondering whether or not you can indulge in a cup of hot chocolate.

Pure cocoa powder is safe for vegans. But that doesn't mean individuals who follow a plant-based diet will find it easy to hunt down cruelty-free drinking chocolate.

If you're dying for a cup of hot chocolate but don't think that it's worth animal suffering, opt for pure cocoa and add soy milk and sugar as needed. We recommend Nirvana Dutch Cocoa Powder.

VEGAN CHOCOLATE IS A THING 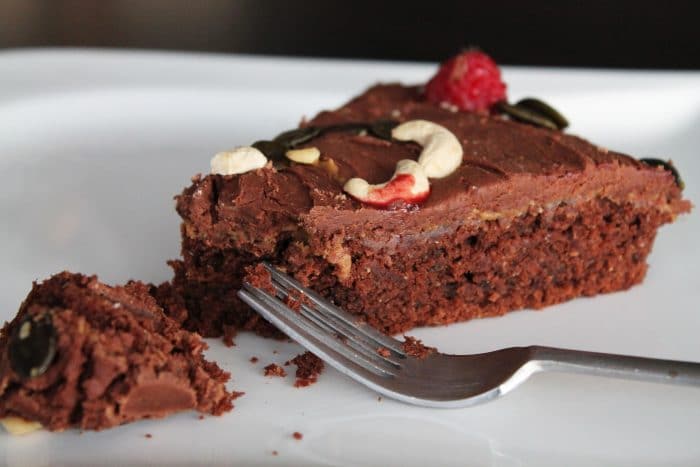 Image by beatrize from Pixabay

There are plenty of vegan chocolate options out there. And you don't necessarily have to scour the internet to find them.

In fact, your local grocery store probably carries more than one type of vegan chocolate.

More often than not, these chocolates are accidentally vegan. In other words, they're not labeled or marketed as such. Rather, they're simply high-quality chocolates that are free of fillers and additives.

Of course, there are plenty of chocolate brands that cater specifically to vegans too.

If you can't get enough chocolate, have a look at PETA's guide to vegan chocolate. 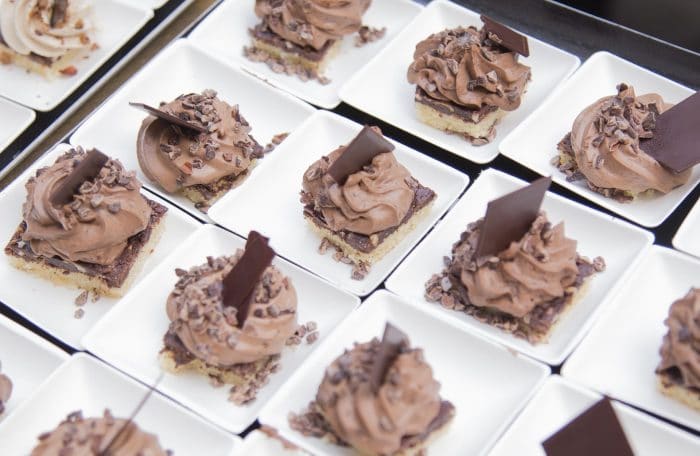 Image by ElodiV from Pixabay

Just because you've decided to follow a plant-based diet doesn't mean that you'll have to give up chocolate.

However, it does mean that you'll have to be more selective about the type of chocolate that you eat.

Most high-quality dark chocolate is free of all animal products, hence the positive answer to "Is chocolate vegan?" The cheap stuff might not be, but you probably don't want to be eating low-quality chocolate bars anyway.

Nonetheless, today there is a vegan version of pretty much everything, including milk and white chocolate bars. Sure, it might take you longer to get your hands on a slab of white chocolate than it would an omnivore or even a vegetarian.

But it's worth remembering that by choosing to consume vegan chocolate you are contributing to a kinder and gentler world. And what could be sweeter than that?

Do you have a favorite brand? Let us know in the comments below.

Samuel Warde
Previous Post: « Beyond Burger Review: The Juicy And Delicious Alternative To Meat
Next Post: How To Make Vegan Cheese That Tastes Like The Real Deal »