7-11 has over 8,000 stores across the U.S., and they have officially switched to using the vegan mayo, Just Mayo by Hampton Creek, in all of them. Exclusively. This is a huge deal, and a major win for vegans, even if they can’t eat most of the food the mayo will be put on. The reason it’s such a big deal is because 7-11 could have used any number of authentic mayonnaise suppliers, and as far as I can tell, they have no reason to pander to the vegan community. 7-11 does just fine selling hot dogs, doughnuts, nachos, and many other convenient store foods that are not vegan friendly.

Hampton Creek recently announced the news on Twitter with much excitement and enthusiasm. Hampton Creek has already gained more mainstream fans than any other type of plant-based mayo, and this merger is likely to make them a household brand name. Hampton Creek also makes Just Cookies, Just Cookie Dough, and the experimental Just Ranch, so I wouldn’t be surprised if we see one or two of these items popping up in 7-11s too at some point in the near future.

The only bad part of this news is that many of the 7-11 foods that will have Just Mayo on them, mainly their sandwiches, aren’t vegan. Nevertheless, this is still a major step in the right direction for the convenient store giant.

The chart below shows just how much this merger can do for the planet. 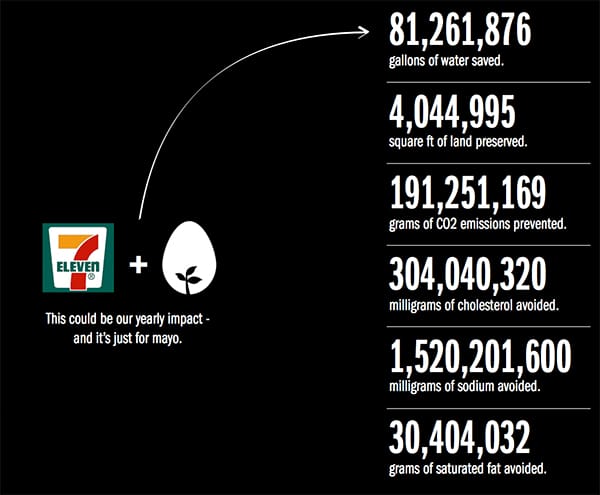