4 Easy Vegan Sour Cream Recipes For You To Try

​Going vegan doesn’t mean you have to swear off everything you used to eat. All you have to do is get a bit creative with your dishes. You can make virtually anything out of plant-based material, including protein-rich meals and dishes that traditionally contain dairy.

Health food stores are now more common than ever. You’ve probably seen some vegan sour cream on the shelf - or maybe even have tried some for yourself. If you have, you’ve probably noticed that these products leave something to be desired.

The vegan sour cream you get in the store just doesn’t taste like the real thing. If you want to get closer to the sour cream you gave up, try these recipes we listed below. They’re far better than anything you’ll find a Whole Foods.

How Can You Make Sour Cream Vegan?

You might be wondering how to make a vegan recipe that has “cream” in the title. It’s a fair point, but there are vegan recipes for almost anything.

Instead of cream, these recipes use cashews, coconut cream, non-dairy milk, lemon juice, and tofu. You’d be surprised what you can do with these base ingredients when you’re trying to replicate a dairy product. It might not be identical to the sour cream brand you buy in the store, but it’s as close as you can get.

Even if you aren’t vegan, you can enjoy the health benefits of vegan sour cream. If you’re lactose intolerant, you may have never fully experienced sour cream in the past. Vegan sour cream allows you to taste what everyone else has been enjoying for years finally.

Vegan sour cream is also far healthier than regular sour cream. When you use only plant-based ingredients, the result will almost always be more nutritious than mass-produced products that use dairy.

Even if you’re making your regular sour cream at home, the vegan alternative will be healthier for you. On top of that, it brings a very similar taste, depending on the recipe you chose. If you don’t typically like the flavor of sour cream, don’t worry! Try the coconut sour cream recipe we listed at the bottom. It will be a bit sweeter but might be enough to change your mind.

If you’ve sworn-off dairy, you don’t have to say goodbye to the good gut bacteria that help keep you healthy. Probiotics are the positive bacteria in your stomach that helps you break down and digest food properly. If you don’t have enough of this good bacteria, you will start to develop digestive problems.

Probiotics commonly come in the form of yogurt. While vegan yogurt options offer some probiotics, our sour cream recipes will give you even more. You don’t have to eat dairy products to enjoy the benefits probiotics bring, and you don’t need to spend a fortune buying online supplements either. 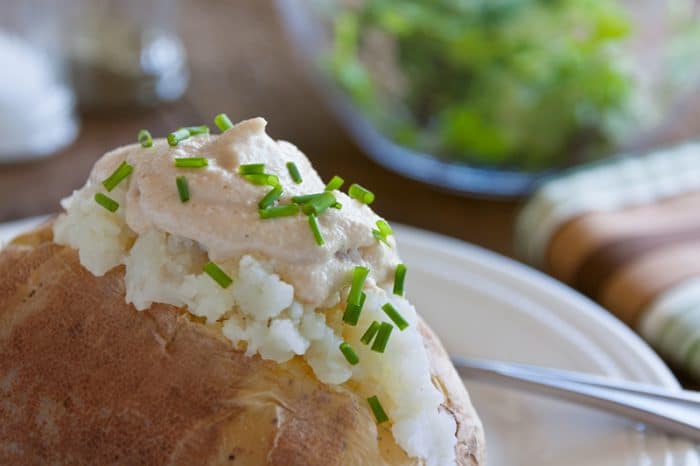 Vegan sour cream has a wide variety of uses. You can include it in other vegan recipes or add it to some gluten-free pancakes or crepes for a delicious finish. There’s no limit to where the vegan sour cream will come into action.

If you want to take your baking to the next level, take a look at some vegan recipes that use sour cream. These recipes will take a bit more preparation than the easy sour cream recipes we have below, but you’ll get the hang of it after a few tries. 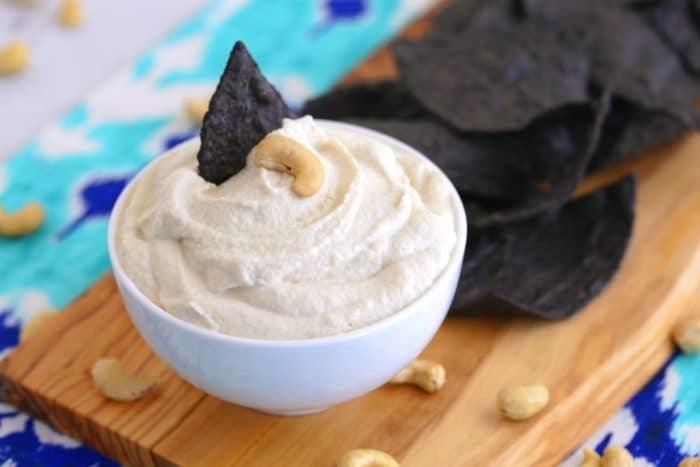 Cashew Sour cream allows you to make sour cream from scratch without much prep work. All you have to do is soak the cashews overnight until they get soft, and prepare your ingredients.

Making the Cashew Sour Cream is extremely easy. Soak the raw, unsalted cashews overnight, and you’ll be ready to blend in the morning. Strain the cashews to get rid of the excess water before adding them to the rest of the ingredients. They should be relatively soft to the touch.

Place all of your ingredients in a blender, let it spin for about six minutes, and you’ll be good to go. You’ll know when the recipe is finished once the cashews become a smooth, white mixture in the blender. Getting much easier than this recipe is hard.

If you want to sever the recipe cold, let it sit in the fridge for a few hours. Once you’ve completed the recipe, store it in a sealed container in the refrigerator. It will last for about a week and a half, but you’ll probably have finished it by then! You can always freeze the sour cream and keep it for a few months at a time. 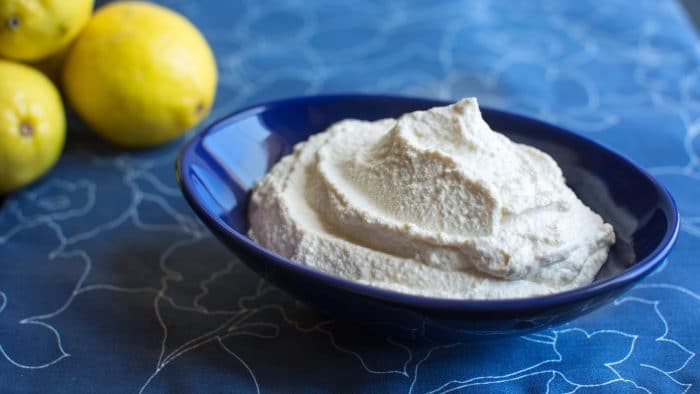 Tofu sour cream is probably the most popular form of vegan sour cream. Below is the best recipe we’ve seen for the classic dairy-free sour cream dip or topping.

Take your favorite organic tofu, and add it to the list of ingredients above. Save the green onions or chives for later, or skip them entirely if you don’t care about presentation.

Once you’ve prepared your ingredients, put them all in a blender together and get started blending. The sour cream should take its form in about a minute. Once the ingredients are thoroughly mixed into white cream, take a taste and see what you think.

From there, tweak the ingredients to match the taste you’re trying to achieve. Add some more lemon juice, apple cider vinegar, and mustard if the sour cream needs more flavor.

When you’ve got the perfect mix, pour the sour cream into a container and mix the chives or green onions throughout. Seal the container and refrigerate your sour cream for about 30 minutes.

After that, it will be ready to serve. You can keep the sour cream frozen for about a month, or in the fridge for a week and a half. 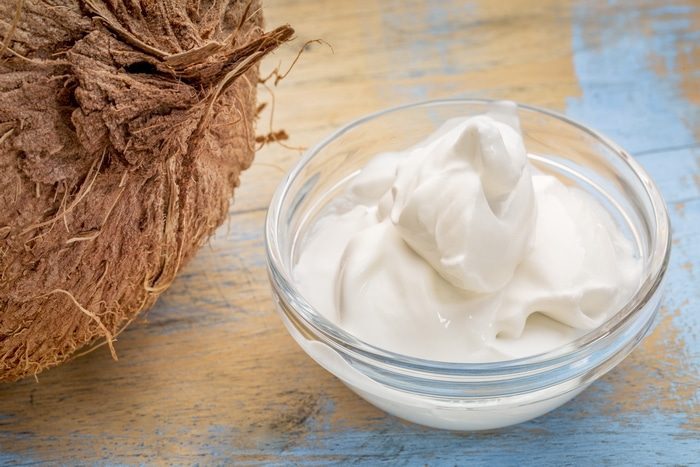 If you don’t like using tofu or cashews as a base ingredient for your vegan sour cream, try this coconut recipe and see what you think. It will be a bit sweeter than some of the other recipes we included, but it’s just as easy.

Refrigerate your coconut milk for at least an hour before you start your recipe. You can always freeze it for a bit if you don’t have time to wait for the can to chill, but make sure you don’t leave it in there for too long.

Once the can of coconut milk is cold enough, separate the thin coconut milk from the thick cream at the bottom. You can keep the milk for another recipe if you like, but all you need for the coconut sour cream recipe is the cream below. If the coconut flavor is too strong for you, add some soy, almond, or coconut milk - whichever you prefer.

Add your lemon juice to the coconut cream, then start adding apple cider vinegar, starting with ½ tsp. Be careful when adding the vinegar. If you add too much, the taste will overpower the recipe. Add the rest of your ingredients and start mixing.

Once you’ve sufficiently mixed the ingredients, taste them to see if you want to add more vinegar or salt. Add these to taste and continue mixing.

When you’re done, put your sour cream in a mason jar or another airtight container and put it in the fridge. Keep the sour cream refrigerated four about a half hour. After that, you’re ready to serve. The recipe will keep in the fridge for around five or six days. 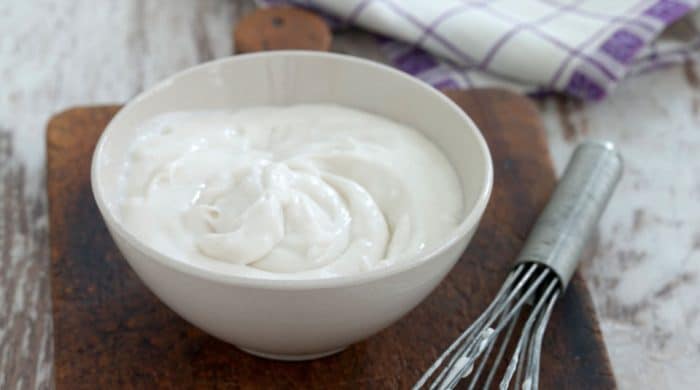 You don’t have to be vegan to enjoy the delicious benefits of vegan sour cream. Check out one or two of the recipes we included above to make a healthier, dairy-free version of traditional sour cream. Who knows, you might even like it better than the original.

We encourage you to make your own variations of these recipes as well. Tweak them to your liking and let us know if you find anything that works. For the tastiest results, combine one of these recipes with some of the other vegan dishes we have listed on our site!