The 10 Best Sources of Vegan Probiotics

We’re used to thinking of bacteria as bad, but did you know there are good bacteria, too? That’s right; scientists are starting to learn more about the vital importance of the microbiome, the complex symbiotic arrangement of microbes (including bacteria) that live in our bodies and contribute to our health.

Since so many of us now have a damaged microbiome, probiotics have become an important supplement to restore our stores of good bacteria. Unfortunately for vegans, however, many mainstream probiotic supplements are dairy-based.

Does this mean vegans can’t take probiotics? Not at all. In fact, there are at least ten fantastic sources of vegan probiotics you need to know about. 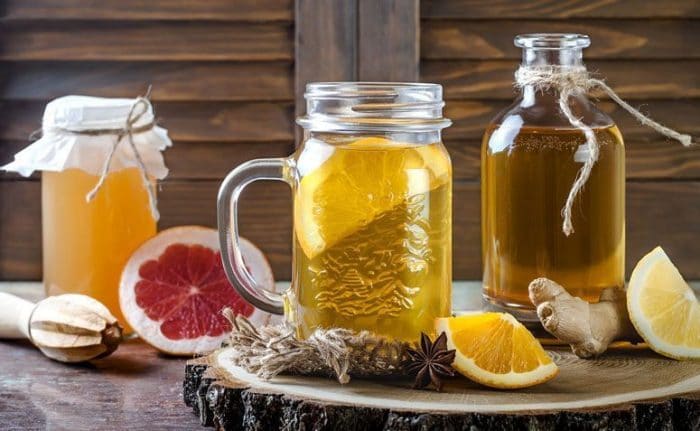 Kombucha is a black tea that’s been fermented with sugar. It’s been around in the Far East for over two thousand years and only recently has it begun to get the health accolades it deserves in the west. A variety of sugars can be used for the fermentation process (watch out for honey!) as well as flavors.

Scientists also concluded the kombucha had a large fungal diversity in the cellulosic pellicle (the “floating mat” on the top of the tea that causes the fermentation).

You may purchase kombucha pre-made at a growing variety of health food and mainstream retail outlets, and you can also find kits and instruction so you can make it yourself. 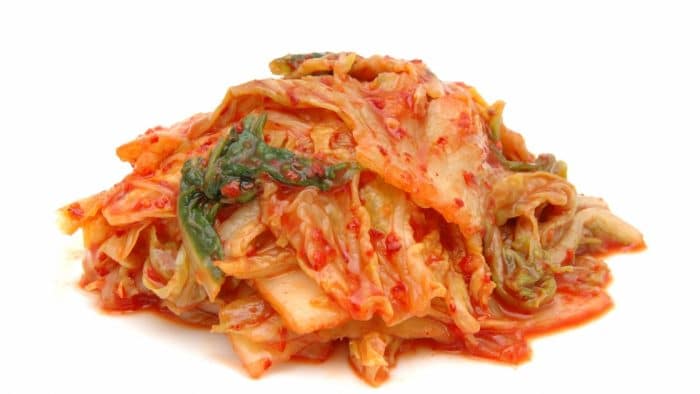 Kimchi is the well-know Korean dish of fermented cabbage and other vegetables that are served alongside steamed rice for most meals in the Asian country. When fermented with probiotic lactic acid bacteria (LDB), scientists have found the pathogenic bacteria, and putrefactive bacteria are suppressed or eliminated, while LAB continues to grow.

Kimchi isn’t just a delicious side to a Korean meal that happens to be full of vegan probiotics, however; it’s also been linked to fighting cancer, constipation, obesity, high cholesterol, skin issues, and so much more!

Kimchi can be purchased premade, but it can also be made at home following one of many readily available recipes. 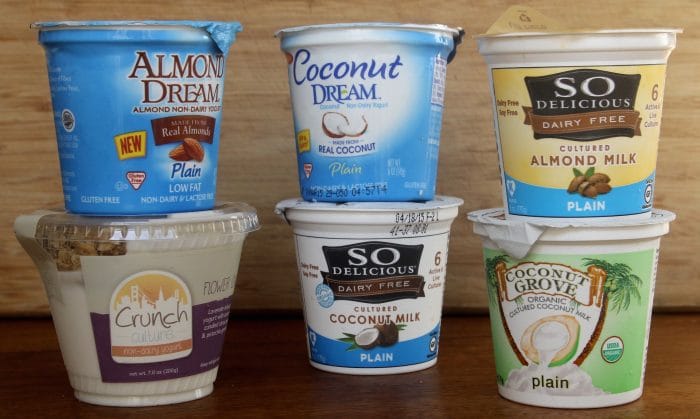 Yogurt is a great source of probiotics, and fortunately, there are lots of new vegan dairy options for people who don’t want dairy or who live a vegan lifestyle. These non-dairy yogurts are coconut-based, soy-based, or sometimes even almond-milk-based.

The probiotic that’s usually added to these yogurts is lactobacillus acidophilus, which was first discovered in the 1890s by Llya Metchnikoff, who went on to win a Nobel Prize. Lactobacillus is today known for a host of benefits, including: 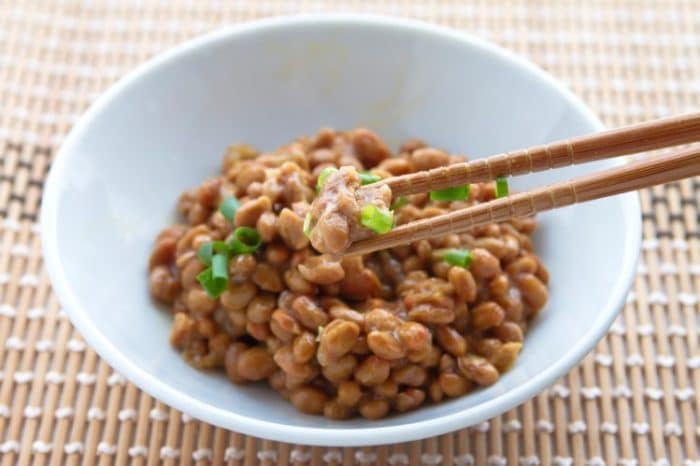 Natto has a funny name but don’t let that fool you! Natto is a traditional Japanese dish. It’s made from fermented soybeans and is often served as a breakfast food or alongside soy sauce, karashi mustard, and a Japanese bunching onion.

While soy has somewhat fallen out of favor in recent years, when properly prepared from organic ingredients, a dish like natto can play an important role in delivering all the benefits of vegan probiotics straight to your digestive tract.

The bacteria found in Natto is Bacillus subtilis, which scientists believe may, among other things, stimulate the body’s immune response. 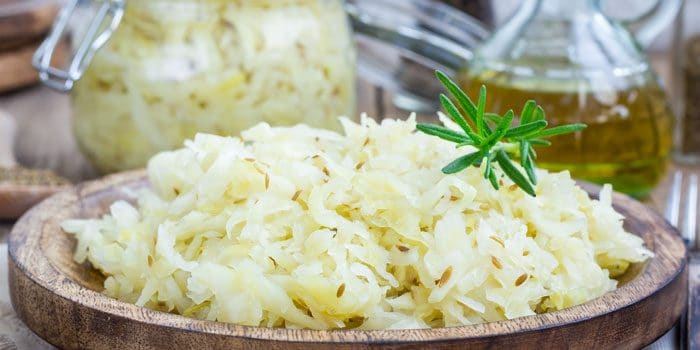 Sauerkraut isn’t just for Reubens, nor is it just loved in Germany! The European cousin to kimchi, sauerkraut is also fermented cabbage. Like its Korean relative, it is high in beneficial organic acids.

The sourness of the cabbage might take a little getting used to, but in addition to the great vegan probiotics your gut will enjoy, you’ll also get tons of helpful digestive enzymes, a huge plus if you often suffer from digestive issues. 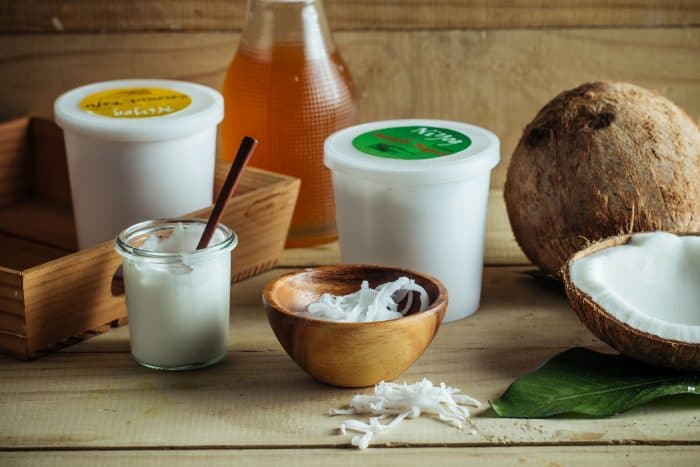 Kefir is a fermented dairy product traditionally made from goat milk. It’s similar to yogurt (though it’s been around for even longer; over 3,000 years!) and so beneficial that the original Russians and Turks who created it called it a word that means “feeling good”!

Today, we can also find coconut kefir, a kind of vegan kefir, made with kefir grains from the juice of young coconuts. It’s not usually as high in probiotics as traditional dairy kefir, yet it’s still highly beneficial. It also tastes delicious! 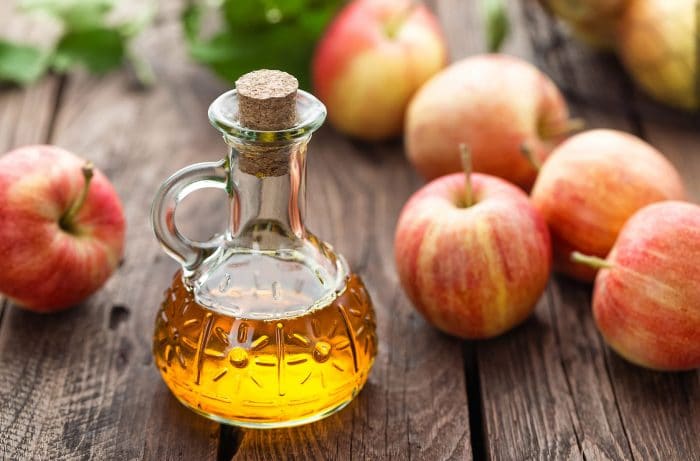 Apple cider vinegar is made from fermented apple cider. This means it has much less sugar than apple cider or apple juice (and fewer calories). You don’t need a lot; just one or two tablespoons a day can deliver powerful benefits that, in addition to probiotic delivery, include everything from helping with cold symptoms to increasing insulin sensitivity in diabetics, to taming heartburn. 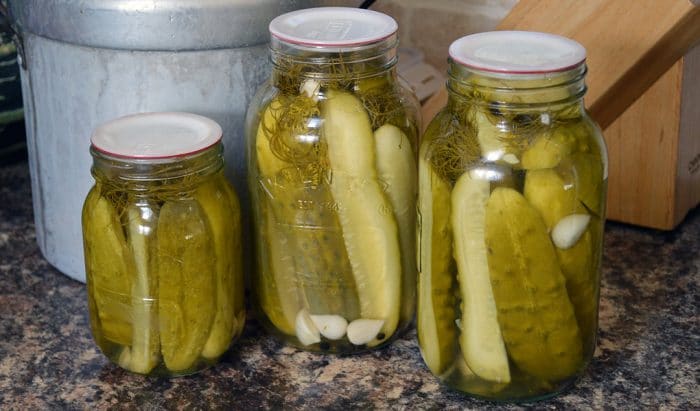 Vinegar was the original brine of choice to pickle foods such as cucumbers traditionally (turning them into yummy crunchy pickles). The benefit was probiotics but today’s brines are often made from salt and water, which means zero probiotics.

Fortunately, there are more pickle makers returning to traditional methods (look for salted gherkin pickles being made from small batch food manufacturers using organic ingredients or local makers), and you can buy those. Or, you can try making them yourself! It’s a simple and tasty way to get more vegan probiotics into your system. 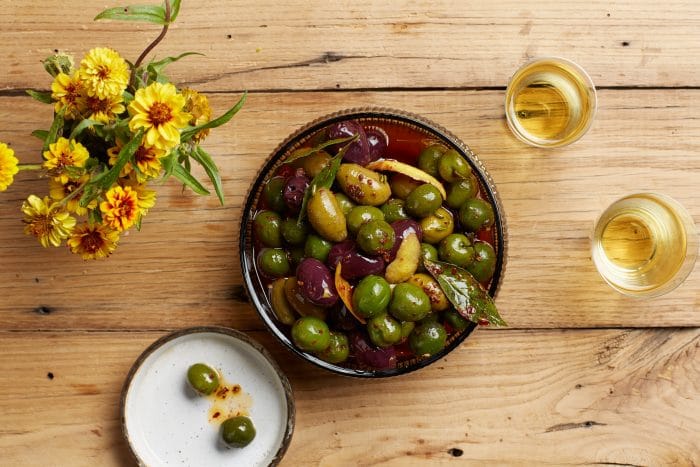 Brine-cured olives are another yummy way to ingest lots of great vegan probiotics. However, just like with pickles, it’s the traditional brining and pickling methods that result in the development of probiotics.

As it turns out, it’s not just the probiotics that make olives so good for us. They’re also extremely nutrient dense and filled with good fats that promote healthy brain development and help to stabilize weight and increase heart health. 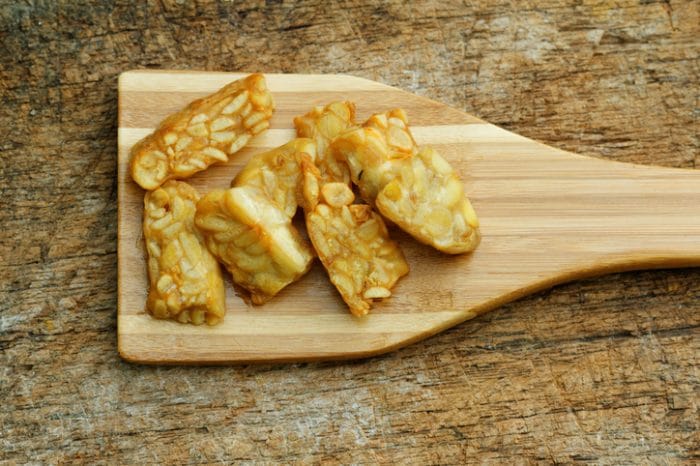 Miso and Tempeh are traditional foods that hail from across oceans, but we have the added benefits of enjoying them in our diets now! Tempeh is an Indonesian stable made from fermented soybeans.

Similar to tofu, it can be eaten raw or boiled; you might be primarily familiar with tempeh as a meat alternative. Like most things, how it’s prepared can impact its nutritional value, so try to stay away from tempeh that’s been fried or heavily cooked. The closer to raw, the more probiotics you’ll be able to enjoy! 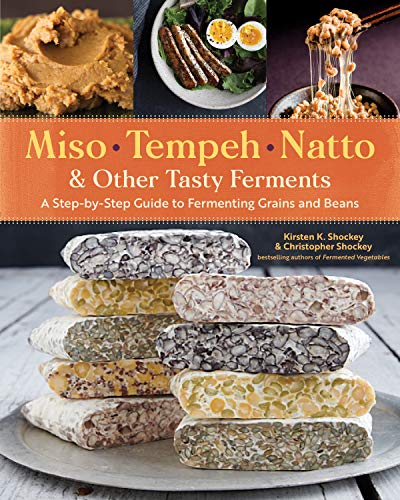 Miso is another delicious Japanese product. It’s a spice that’s often made into delicious miso soup, and like tempeh, it’s made from fermenting soybeans, barley, or brown rice with a fungus called koji. Miso is spreadable and can even be used in place of butter.

If you’re anything like us, you can’t wait to start eating one of these ten delicious foods, but if you’re not quite convinced, allow us to tell you a little more about what makes probiotics so good for us. 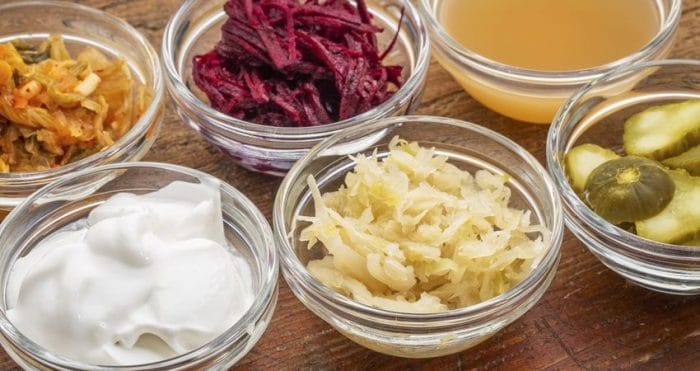 Lose Weight Faster (or Keep it Off, to Begin With)

Many of the vegan probiotic food sources we’ve already listed are also high in fiber, which can help you lose weight, but more importantly, scientists now believe that consumption of probiotics can help keep the weight off by decreasing the amount of fat your body absorbs when you eat. If that’s not a reason to include a serving of kimchi at each meal, we don’t know what is!

Improve Your Brain and Mental Health

One of the most surprising benefits that’s come from the study of probiotics is how closely linked the gut, and the brain is. Some scientists are even referring to the microbiome as a sort of “second brain.”

This means that the bacteria in our microbiome can impact our brain function and our moods, helping to reduce stress and impacting how our brain perceives the world around us. Probiotics can even help to decrease memory loss and symptoms of autism, anxiety, depression, and OCD.