If you’re cooking up a plate of vegan pancakes, you might want some syrup to go with ’em, but is maple syrup vegan? Pure maple syrup is literally just tree sap, so pure maple syrup is always vegan. It’s also expensive. Imitation maple syrups, which is what you’re most likely to find at restaurants and grocery stores, are also vegan – at least 99%, that is, because they often contain artificial and “natural flavors” that are of unknown origin. 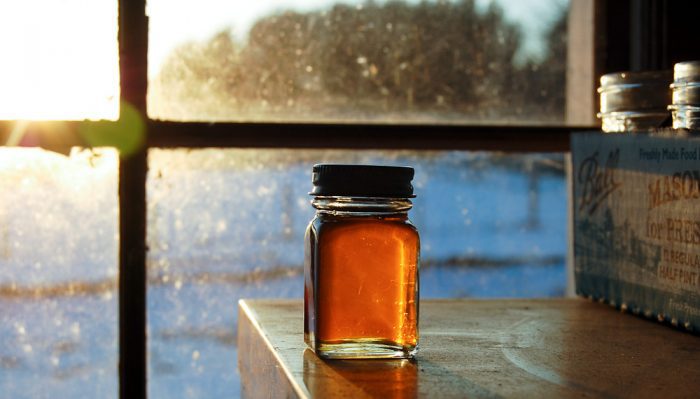 Apart from the actual ingredients and their effects on your health, another big difference between real maple syrup and ‘pancake syrup’ is the taste. Pure maple syrup is the real deal, whereas Aunt Jemima and Mrs. Butterworth’s are artificial facsimiles, so if you want an authentic maple flavor, you’re only going to get it from pure maple syrup.

Lastly, pure maple syrup comes in two grades: A and B. Grade A is lighter in color – golden or amber – whereas Grade B is much darker, like molasses. The darker the syrup, the more intense the sweetness and flavor will be. If you are not used to eating real maple syrup, Grade B may be too intense for your taste buds.

It’s not that common to find pure maple syrup in stores, so we usually buy it on Amazon.