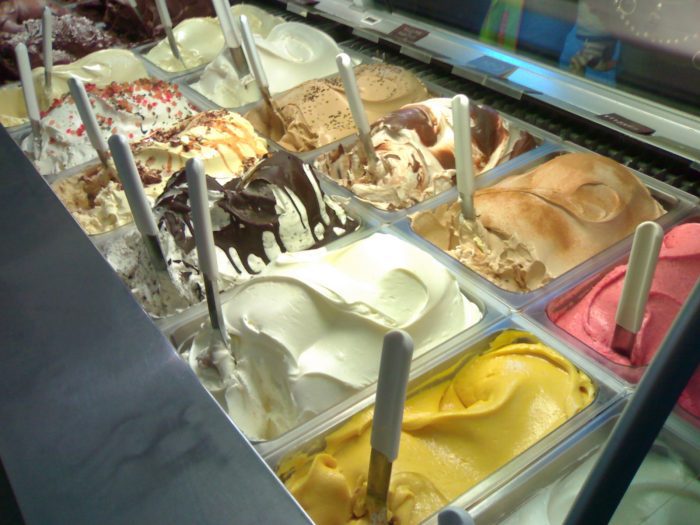 Gelato is the Italian version of ice cream. It’s very similar to American ice cream except for a few key distinctions, such as its smoother texture and softer consistency. Most people would say it’s more like frozen yogurt than ice cream, but with a sweeter, richer taste. Although gelato does not contain any egg yolks like American ice cream does, it is still made from cream, which means it’s not vegan. But before you get too bummed out, you can take relief in knowing it’s easy to vegan-ize gelato! Vegan gelato can be made using full-fat coconut milk and or raw nuts instead of cream. It’s delicious. Check out these six vegan gelato recipes.

Where to Buy Vegan Gelato

At the time of writing this, I am not aware of any vegan gelato brands that can be purchased at the grocery store or online. However, there’s always the off chance you might find something local in a health food store or all-vegan grocery store, or maybe even stumble upon a vegan gelato shop in a trendy metropolitan area. You never know. NYC now has a fully vegan deli. That being said, there are plenty of brands of vegan ice cream out there, including Ben & Jerry’s new flavors.

Gelato and sorbetto sometimes get confused since they’re both Italian names for frozen desserts. Sorbetto is simply the Italian word for sorbet. Sorbetto is similar to gelato, but it does not contain cream, so it is typically vegan friendly. If you don’t have the time or energy to make vegan gelato, sorbetto is the next best thing. Some people even prefer it.

Adam
Previous Post: « What’s the Difference Between Meringues and Macarons?
Next Post: How to Dry Roast Cashews and Other Nuts »