Are Humans Omnivores or Herbivores?

We’ve all been taught that humans are omnivores – animals that eat both plants and other animals – but do our bodies agree with that assessment? There are two ways you can determine whether an animal is a herbivore, carnivore, or omnivore: 1. Observe what the animal eats. 2. Study the animal’s anatomy and physiology.

We classify humans as omnivores because we observe that humans eat both plant-based and animal-based foods, but if we take a close look at the structure of the human body, we see there is more evidence to suggest humans are herbivores, not true omnivores.

Carnivores, omnivores, and herbivores all have distinct anatomical characteristics that are similar across species within in each group. For example, all true carnivores have simple digestive systems with short small intestines that equal roughly three to six times the length of their body. These short intestines allow food to pass through the body quickly, which is one of the reasons a lion is less likely to get sick from eating raw meat than a human. Herbivores, on the other hand, have long digestive tracts that enable the slow breakdown and fermentation of plant matter. By contrast, a herbivore’s small intestine is typically twice as long as a carnivore’s, measuring in at roughly 10 to 12 times the length of its body. 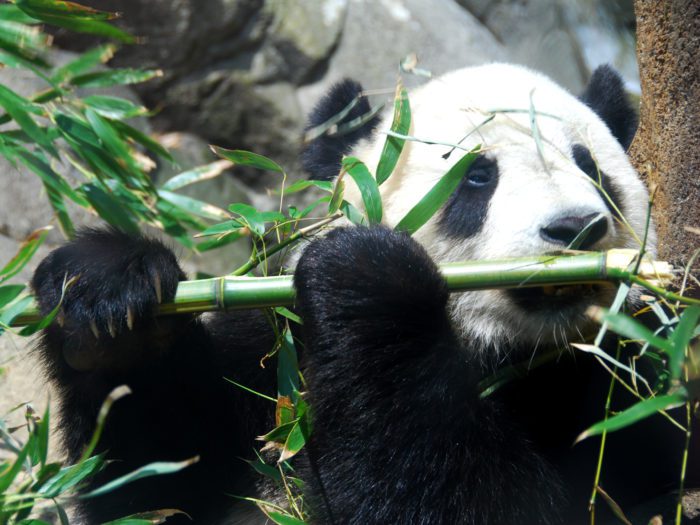 Pandas are a special class of herbivores called folivores.

Before we delve further into this subject, it’s important to know what a folivore is. A folivore is a specialized type of herbivore that has some sharp teeth similar to carnivores and omnivores. These sharp teeth, however, are not for eating, but for fighting and intimidating. The best example of folivores are the great apes, which include humans. Other examples you’d be familiar with are hippos and pandas.

Some people like to draw a distinction between herbivores and frugivores – animals that primarily or exclusively eat fruit – but for the purpose of this article, we will not nitpick between the two since both are plant-based diets and frugivores are technically herbivores.

If we run down the list of physical traits common amongst carnivores and herbivores respectively, we’ll see that the morphology of humans matches the characteristics of herbivores perfectly, not omnivores or carnivores, which have similar traits to each other.

It seems appropriate to start where it all begins: the mouth. We’re told humans have canines because we are meat-eaters; however, the rest of our teeth are flat, and even our canines are rather blunt and pathetic compared to real carnivores. Regardless, when examining the mouth to determine what kind of diet an animal has evolved to eat, there is a lot more worth looking at than just the canines.

Carnivores and omnivores have large mouths full of sharp teeth. Whether we’re looking at an obligate carnivore, like lions and tigers, or a classic omnivore, like bears and raccoons, we’ll notice that all of these animals have wide-opening oral cavities lined with sharp canines, incisors, and molars. These sharp teeth make it easy to rip through flesh, and since chewing isn’t necessary for carnivores and omnivores, there’s no need for flat teeth better suited for grinding. Carnivores and omnivores even have different saliva than herbivores. Their saliva does not contain any digestive enzymes to aid in the breakdown of carbohydrates, which makes sense since they mostly eat protein and fat.

Herbivores have smaller mouth openings full of blunt teeth suitable for extensive chewing. It is important that herbivores chew their food throughly so that their bodies can more easily break down the tough and fibrous plants they eat. Herbivores also have carbohydrate-digesting enzymes in their saliva to further aid in breaking down food before it hits the stomach.

Humans have small mouths, blunt incisors and molars for chewing, and saliva that contains digestive enzymes.

Moving down to the stomach, we’ll see the differences between carnivores, omnivores, and herbivores continue to stack up.

Carnivores and omnivores have simple, singular stomachs. Their stomach acidity is much higher than herbivores, with a pH less than or equal to 1 on the pH scale while food is in the stomach. This means their stomach acid is comparable to battery acid while food is being broken down in the stomach. The capacity of a carnivore’s or omnivore’s stomach is roughly 60 to 70 percent of the total volume of its digestive tract.

Herbivores can have either simple, singular stomachs or multiple stomachs. The stomach acid of herbivores is relatively neutral compared to carnivores, with a pH level of 4 to 5 while food is in the stomach. The capacity of a herbivore’s stomach is roughly 30 percent or less than the total volume of its digestive tract.

Humans have a simple stomach with an acidy of pH 4 to 5 while food is present. The capacity of a human’s stomach is approximately 21 to 27 percent the total capacity of their digestive tract.

The small intestine is where nutrients are absorbed in the bodies of animals. The length of the intestine correlates to the diet of the animal.

Carnivores and omnivores have a short small intestine that is approximately three to six times their body length.

Herbivores have a long small intestine that is approximately 10 to 12 times their body length.

Humans have a long small intestine that is roughly 10 to 11 times the length of their body.

Passing through the small intestine, things move along to the colon, the main part of the large intestine.

The colons of carnivores and omnivores are short and smooth. They are not sacculated.

The colons of herbivores are long, complex, and sometimes sacculated.

The colon of a human is long and sacculated.

Differences between carnivores, omnivores, and herbivores can also be found in the liver and kidneys, which of course are vital for detoxifying the body.

The livers of carnivores and omnivores can detoxify vitamin A, and their kidneys produce highly concentrated urine.

A herbivore’s liver cannot detoxify vitamin A, and their kidneys produce far less concentrated urine than that of carnivores.

The human liver cannot detoxify vitamin A, and the kidneys produce a moderately concentrated urine.

There are numerous other anatomical differences between carnivores/omnivores and herbivores, such as the fact that most carnivores have sharp claws, whereas most herbivores have blunt nails and hooves. There are also differences between the jaws and facial muscles. Of course, with so much diversity throughout the animal and plant kingdoms – don’t forget plants can be carnivores, too – you can certainly find exceptions to these norms. Nevertheless, it is clear the human anatomy and its physiology best matches that of a herbivore-folivore, not an omnivore.

Dr. Milton Mills Breaks It Down

Still not convinced? Listen to this interview with Dr. Milton Mills, MD.