I’ve noticed many people take up a vegan diet because they want to be healthier but still make mistakes here and there. While it’s true you can experience health benefits from eating a strictly plant-based diet, you can still encounter many foods that might jeopardize your health. Sodium chloride – slat – is an essential nutrient, but it’s very easy to get enough in your diet. The recommended daily value (DV) for sodium is 2,300 mg for adults under the age of 50, based on a 2,000-calorie diet. Take a look at the common foods listed below to find out if you’re eating too much.

Pickles are a tasty, low-calorie, fat-free snack, but watch out for the tremendous amount of sodium packed in just one pickle. One large pickle – about 4 inches long – contains 1,181 mg of sodium, which amounts to 49 percent of your DV. Eat just one pickle, and you’ve already consumed half of your sodium intake for the day.

Not all potato chips are vegan, but many of them, including lots of the most popular brands. Chips are notoriously high in sodium, and addictive. Before you know it, a whole bag will be gone and you’ll just have consumed a week’s worth of salt.

Olives are obviously a salty food, but you might be surprised by how much sodium less than a handful contains. One serving of canned olives contains 244 mg of sodium – 10 percent of your DV. That might not sound too bad, but keep in mind one serving is only about five olives. I know I usually eat a lot more than five olives when I have them.

Hot sauce is the prefect condiment for a lot of vegan meals: it’s great on beans and rice, burritos, noodles, wraps, and even sandwiches. It adds a lot of fun and flavor to just about any dish. I always have a few bottles on hand. Don’t get carried away, though. Putting hot sauce on every thing you eat can push your sodium intake through the roof. For example, one serving of Crystal hot sauce contains 135 mg of sodium. That’s only 5.6 percent of your DV, but one serving is just 5 ml – about 1 teaspoon. I’m sure you can imagine how quickly that can add up.

Wheat crackers may seem like a healthy alternative to potato chips, but the average wheat cracker contains a surprisingly high amount of sodium. One serving – about 15 crackers – contains 223 mg of sodium, which is 9 percent of your DV. Instead of buying regular wheat crackers, opt for the low-sodium kind.

Many breakfast cereals do not contain any animal products, but they make up for it in salt. You’d be correct to assume breakfast cereals are high in sugar, but you should be equally concerned about the amount of sodium. Even a bland cereal, like generic corn flakes, contains 266 mg of sodium – 11 percent of your DV – per serving. A far healthier choice would be unsalted oatmeal, which only 3 mg of sodium per 100 g serving.

Nuts can be very high in sodium if they are salted. Think: Planters.

Faux meant, like Boca burgers and Tofurkey sausages, can be relatively high in sodium. Just take a look at the nutrition label below. One sausage has 25 percent of your DV! I’m not saying they aren’t delicious, I’m just saying if you have a heart condition, maybe cut back on these types of imitation meat products. 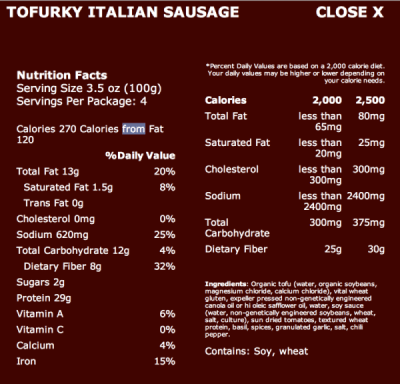