Falafel is a traditional Arab dish that has become quite popular in the west and can usually be found at any Arab, Greek, or Mediterranean-style restaurant. It’s hard to tell what falafel is just by looking at it, so it’s perfectly reasonable to wonder if it’s vegan. Falafel – typically – does not contain any meat, dairy, or other animal products, which means falafel is vegan. However, sometimes it can contain dairy, especially if it is from a prepackaged dry mix.

What is Falafel? Is Falafel Vegan?

Falafel is ground chickpeas and/or fava beans and spices formed into a ball and deep-fried. Sometimes flour is added to the mixture as a binder to hold the chickpeas together. Falafel is sometimes served by itself, but it’s usually served wrapped inside of a pita or flatbread with veggies, such as lettuce, tomato, and onion. 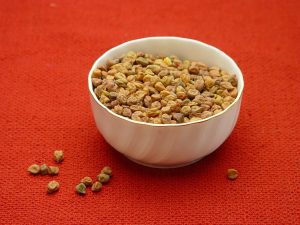 Rare Exceptions and Things to Watch Out For

The last time I bought a falafel wrap it contained feta. I was in a hurry and decided to stop at a fast-food joint I had not eaten at before. I specifically requested “no dairy” when I ordered my food, but I couldn’t help but be overwhelmed by the distinct taste and odor of feta when I bit into my wrap. No visible cheese was in the wrap, but later I figured out the falafel came from a mix that contained dairy.

Another thing you want to watch out for is animal fat/juices getting mixed with your falafel. A lot of restaurants and food carts have vegan food, but that doesn’t make them vegan-friendly – often times, they just have vegan options by accident. Many times, I have stood at a counter and watched the person preparing my falafel cook it on the same griddle he just cooked beef on, or toss it in the same fry basket as someone else’s order of chicken fingers. This is one of those things that is hard to avoid, but if you happen to catch it, you can just politely ask them to prepare your food separately.